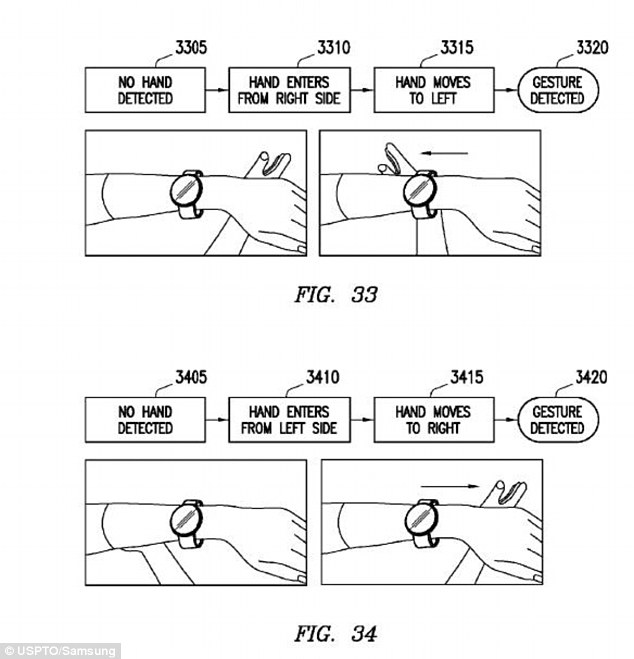 Samsung has patented a wristwatch that can be controlled using gestures. You even need not bother for the touch screen now. The depth sensor actually tells where the user is pointing and orientation sensors are used to open the watch with a flick or to open/close a particular app.

Pictures of the patented smart watch have been revealed while there is no exact plan for its launching yet. The depth sensor actually tells where the user is pointing and orientation sensors are used to open the watch with a flick or to open/close a particular app. The wristwatch also has a microphone that is an add-on to the gesture control. The patent reveals, “A depth sensor may be used in conjunction with an optical camera to enhance display or detection of a device’s environment, or to determine which object a user is pointing at or interacting with via a gesture.”

The smart watch might have a gyroscope, accelerometer, magnetometer or a GPS. You need no smartphone to control your wristwatch. Just use your gestures to control your watch. Besides these smart watches, the company has used gestures controlled technology in its phones as well. You can even send and receive emails, make pictures, keep track of the heart’s condition. The patent has been files last week with no ultimate date of launching however it is expected to be launched within 6 months.

Samsung has unveiled nothing about the wrist watch whether it could make calls or not and what will be the cost etc. According to some sources closer to the company, the smart-watch will be round shaped resembling Motorola’s Moto 360. The rival of Samsung is Apple which is also going to launch such watch.