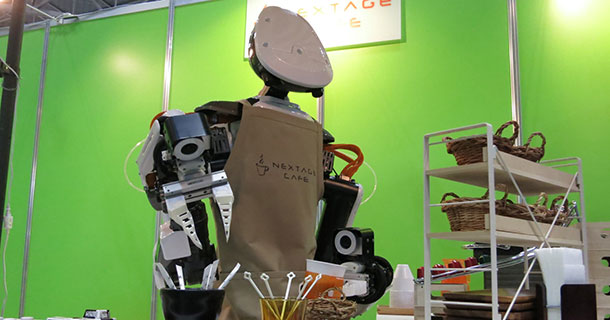 At the Japanese Robotic Week it is not uncommon to come across bizarre machines like Nextage. This interesting robot prepares coffee on demand for visitors to the exhibition.

During the Japanese Robotic Week, held on 15, 16 and 17 October in Tokyo, visitors were not only able to discover the innovative robots like Pom-Pom-robot-girls from Murata, the Robi Robot Kit and its little brother Robit Junior,  but also the Collaborative industrial Robot Nextage by Kawada. 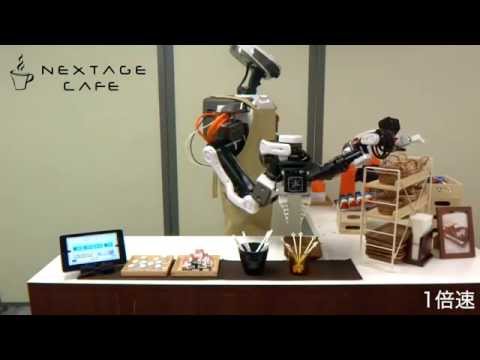 Since 2011, Kawada Industries has been developing a new generation of humanoid platform which is able to perform tasks of varying complexity in an industrial environment in the presence of humans. Indeed, Nextage was designed to operate on the assembly lines of factories, such as Airbus in Spain where this robot was employed earlier this year.

But in the robotic week we do not see Nextage on an assembly line, but rather behind a counter, trying to serve coffee mugs. Its builder wanted to show to the public that how his robot can fit perfectly in any type of environment. The public was rightly surprised by such an agile and flexible robot with two arms. However, the visitor needed to be patient as it the robot an average duration of three minutes to serve the coffee. 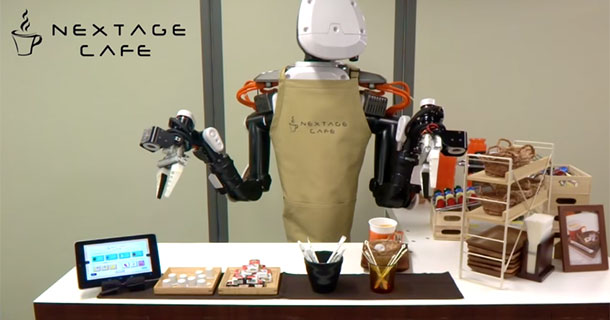 With a height of 170 cm, the machine was able to show all its versatility by not hesitating to don its apron and serve drinks in cups. Programmed for the occasion, the robot used its two mechanical fingers and cameras placed in its head and in each of its arms, to prepare small serving trays containing a coffee cup with sugar bag and milk.

Obviously, Kawada did not market the robot for service in restaurant, but this demonstration allowed the Japanese brand to show how its product was adaptable.