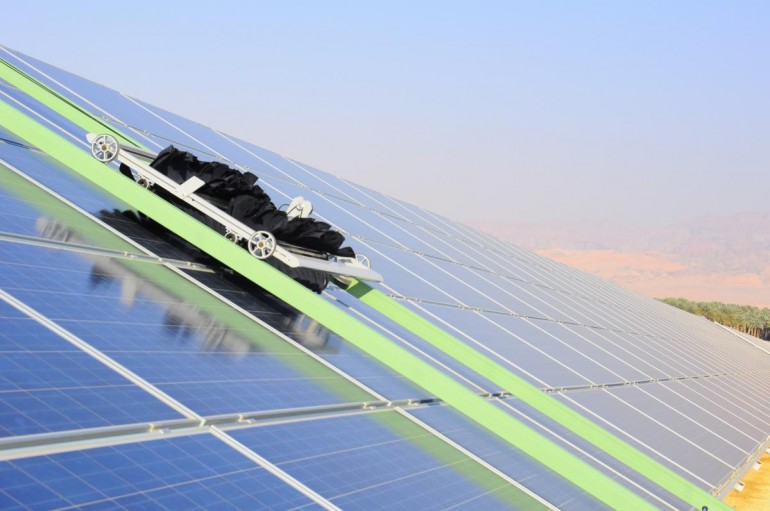 Solar cells are now being extensively used to produce electricity and mostly installed in open and deserted areas. Dusty environment makes the cells dirty and reduces the efficiency of the cells up to 35 percent. Making the cells clean and to remove the dust from the panels is not only a hard task to perform but also many hazards as well. This manual process of cleaning is very time consuming and costly. Israel is using fully automated system to clean the panels. It is considered to be the very first system of its kind in the world.

Israel has a large area of about 200 acres in the Negeve desert where the solar panels are installed. This plant is producing almost 9million KWH electricity yearly for Israel. It is the pioneer solar power plant in Israel. It is a joint venture of Seimens AG and Arava Power, the largest solar company of the country. This solar field is named as Ketura Sun. as earlier mentioned the hurdles for cleaning the panels are too much, hence panels were cleaned 9 times per year. So, by large we can say the panels were operated mostly in dusty conditions yielding low output. Duration of cleaning process is 5 days which means the plant is not producing anything which lowers the efficiency. Furthermore, the risk of damage to the equipment was also there. Hence, overall a lot of wastage was being done

Now, the whole process has been automated, almost 100 robots are being used for this process. These robots produce their own energy via solar panels at their back and they require no water to clean. The robots straddling on a frame moves up and down on the panels. The brush used is made of soft fiber in addition to the air blowers. The rotating brush and air blowers make it 99 percent dust free. This robot is named as Ecoppia E4 robot.

The best thing that makes Ecoppia E4 very interesting is its self-containing energy system. It means no external resources are required to operate it. So, they are totally independent and self-contained.

According to Ecoppia, amassing of dust on the panels can reduce the efficiency up to 35 percent. So, removal of dust can increase the output manifolds. These robots are capable of putting the efficiency of solar panels at an optimum level.