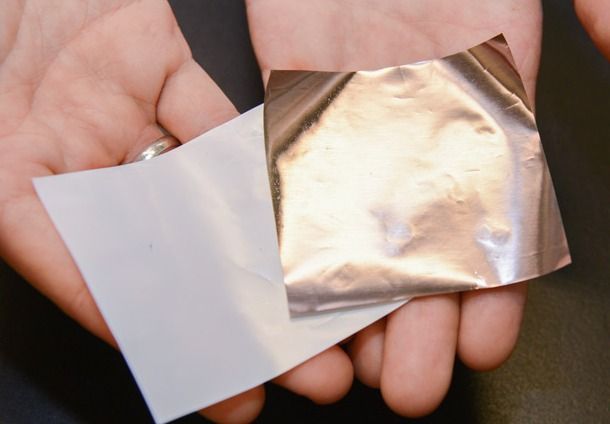 In the United States, a team of researchers at Stanford University has developed a technique to give an early warning for lithium-ion battery system if it gets overheated or catches fire. The technology could easily be incorporated into existing batteries being used in electronics, automobiles or airplanes.

In their scientific article recently published in Nature Communications, the team of researchers explains the reason of the problem and how to fix it. Although very powerful, Lithium has one big flaw: it is unstable. During the charge-discharge cycles, it expands and contracts, causing cracks in the surface of the anode and outgrowths called dendrites. These can damage the polymer insulating the anode and the cathode. This results in circulation of electrolytic solution instead of ions only. If this is the case, a short circuit may occur, resulting in fire or explosion of the battery. This type of short-circuit may occur if the battery charging is either too fast or if it is exposed to a very low temperature.

The detector designed by Stanford researchers is able to detect the formation of dendrites and to sound the alarm before they pose a risk to the battery. Their idea is pretty simple itself. They filled a 50nm thick copper layer on one side of the polymer separating the anode and the cathode. Copper acts as a third electrode which measures the difference of voltage between the anode and the separator. “When the dendrites are long enough to reach the copper layer, the voltage falls to zero. It is a signal that the battery should be removed before the dendrites reach the cathode and cause a short circuit,” says Yi Cui, professor of materials science and engineering at Stanford. Then a message would be displayed on the terminal screen or a beep sound produced to warn that battery needs to be replaced.

That would leave plenty of time to react before an accident occurs. And it would be even possible to have the alarm earlier by placing the copper layer close to the anode. The nano-coating of copper is so fine that it does not alter the flow of lithium ions between the cathode and the anode the researchers said. “Adding this thin conductive layer does not change the performance of the battery, but it can make a huge difference to security “, said Yi Cui. 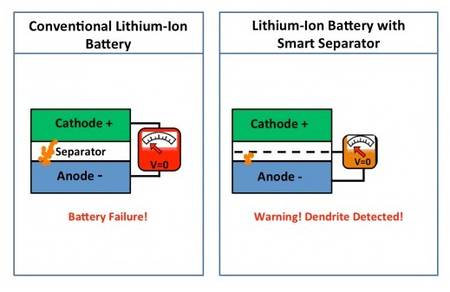 This diagram illustrates the principle of the dendrites detector. On the left, a standard lithium-ion battery is shown with its cathode and anode isolated by a separator. When dendrites (here represented by orange spots) pass through the separator, they cause a short circuit which may result in overheating or fire. On the right, the separator coated with a polymer layer of copper acts as a third electrode, the voltage drops to zero as soon as the dendrites come in contact with it, which can be used to trigger preventive alarm.

This innovation is not only useful for batteries that power mobile devices such as smartphones and tablets. But also other electronic devices. “Some electric cars are equipped with thousands of lithium-ion cell batteries. If a battery explodes, it’s all that can potentially explode”, said Professor Cui. Furthermore, this integrated fire alarm can also be made using other materials such as zinc or aluminum instead of copper.