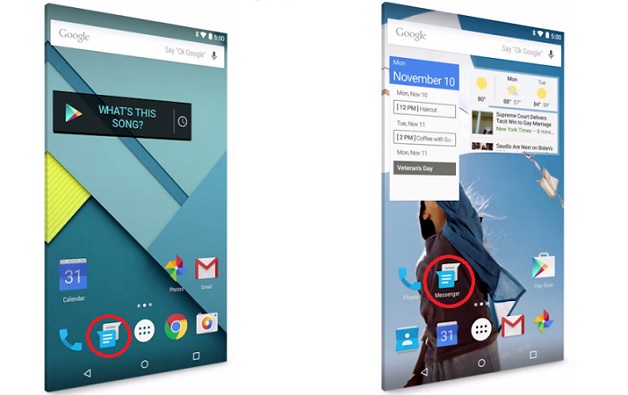 Since the availability of Android 4.4 last year, the application Hangouts has become a universal messaging application on Android for both using Google mail or managing SMS. In the next version of Google mobile system, it might also be put aside by something new.

Hangouts was launched with the social network Google Plus and especially used for video application gradually replacing all other multimedia communication softwares Google ecosystem to start with Google Talk . Last year, it even surpassed SMS application on Android smartphones. However, several visuals suggest that Hangouts is outlawed in version 5.0 of Android, named Lollipop.

In several photos of Android 5.0, published by Google, we indeed see a new application integrated directly into the welcome screen. This is called “Messenger”. On enquiry Google explained the role of the new app  : “Messenger and Hangouts offer a different choice to users, each with its own advantages. Hangouts works well for communications between platforms (Web iOS, Android) and for different media (video, voice, email, SMS). Messenger is designed to be a quick and easy way to send and receive SMS and MMS messages on Android “ .

Hence, Messenger should not replace Hangouts for the texting applications. It will therefore not be available on tablets, but replace the SMS application integrated into Nexus smartphones. However it is difficult to understand why Google finally decided to gives up Hangouts as its unified application for all kinds of communications.