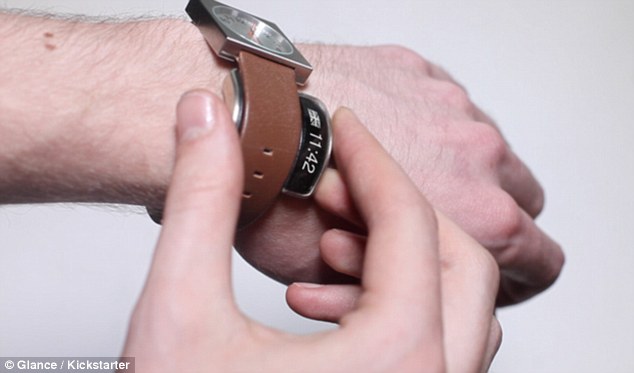 A gadget named Glance has been introduced that can turn an ordinary watch into a smartwatch. It only costs 40 Euros and slides on the straps of the ordinary watch. It can connect with smartphone, notify you about incoming calls and message, track the users’ activity and even control other devices.

The wrist watches have undergone a huge evolutions in the last few years. Now, smart watches come in many different shapes and applications. A number of smart functions are provided by these watches. But recently, a new gadget named Glance has been introduced.  It is rectangular in shape and can turn any ordinary watch into a smartwatch. It costs only 40 Euros and slides on the straps of the ordinary watch. It can connect with smartphone, track the users’ activity and even control other devices.

The Glance is made by a Toronto based company that claims it to be the first such gadget that has ability to turn an ordinary watch into a smart watch. It will be made available for the customers in October and a crowd funding campaign has been started on the Kickstarter. It comes in three different sizes. It can easily be fitted with the bracelet or any tight fitting strap of a watch. The device is thin and made of aluminum. There are three modes in which the device works such as motion control, activity tracker and phone notification. The modes can be switched easily with the help of two buttons.

Keep your smartphone inside the pocket and learn who is calling you without seeing the phone actually. The smart device can also reply with some pre-programmed messages when you are driving. A speed reading technology lets you read 450 words in a minute. A colored LED is also provided that alerts you about the email, texts and calls. There are three other LEDs as well to let you know about the number of texts waiting in the queue. A 3D motion detector is also provided with the watch that monitors the activity of the user.

The additional tasks such as finding a smartphone, filtering the unwanted calls and use as an air mouse can also be performed with this amazing gadget. The technology is connectible with iOS as well as Android but company is making efforts to connect it with Windows and Blackberry phones as well. Company has plans to add microphones and speakers for additional functionality. The amazing gadget cost $70 CAD plus shipping.