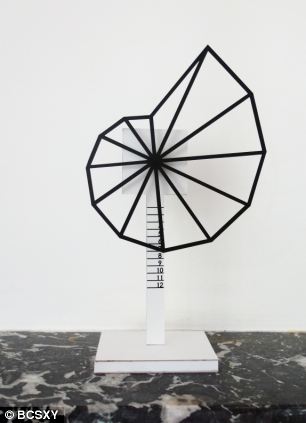 Two Amsterdam based artists have designed an innovative clock which they claim makes reading the time easier. You can also consider it as a form of modern art. The designers’ motivation behind this creation was to make something not only aesthetically more beautiful than banal digital displays, but at the same time more easy to read. The shell-shaped clock is a linear cycle clock that tells the time by revolving. The shell revolves slowly around a central point similar to the hands of a traditional watch.

The passing hour is indicated using the shell and you just need to have a glimpse on the arty timepiece to know the time. We know that it is a digital era and a lot of watches offer digital display but this is also a fact that numbers of people are not pleased with digital display. The design is not to be commercialized as unfortunately it does not feature all the modern needs like display of seconds. However, this idea is really thought-provoking and must be appreciated. According to designers, Boaz Cohen and Sayaka Yamamoto, “This unique time display offers a playful alternative to one of the most known objects to men and may draw some more attention and increase awareness to our advance through time”.

A number of efforts are put by the researchers across the world in putting their spin on the clock either in the form of digital or analog form. To find out the moon’s phase, world’s first moon clock is being developed which measures the phase with the help of tidal power. A robot clock is also developed in Germany that writes down the time on a whiteboard using dry wipe pen. A mechanical arm has been developed in order to write down the current time and then wipe it off after sometime.

Similarly, American scientists in Washington have replaced the hands of the clock with ball bearings.  The rotation of the ball tells the time accurately. The central ball’s rotation tells the minutes while the other tells the hour. This time piece can help the impaired persons as well.