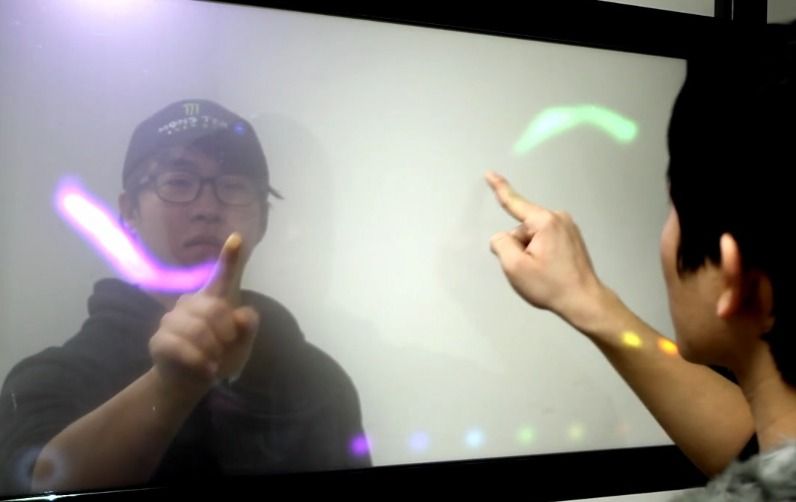 Transwall, a totally transparent touchscreen allows two people on the opposite side to interact with each other by touching the screen, which in turn produces audio and haptic effect. This system could offer many fun and educational applications, used in museums and even in hospitals for quarantined people.

A team of researchers from the Korea Advanced Institute of Science and Technology (KAIST) has developed a transparent tactile screen. Baptized as Transwall, this screen provides novel opportunities for interaction where two people facing each other can separately or together interact with the applications. The image is projected on each side by two projectors located on either side.

The screen itself consists of two Plexiglas sheets which enclose a holographic film. Infrared sensors placed under the screen detect the movement of the fingers while speakers output sound. Thanks to  transducer surface placed in the upper part of the screen frame when a person touches the screen, he feels a small vibration with the associated sound.Two people from each side of the screen can touch the same point at the a time without interference. Depending on the application, this action will trigger different haptic, acoustic and visual effects. 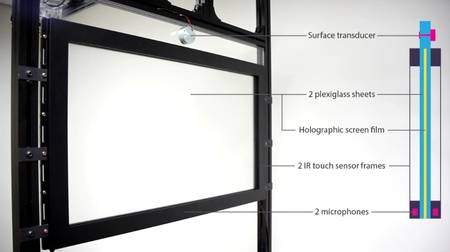 In a video shot by the Discovery channel, an Amoebae simulation is presented. When the screen is quickly touched at the same point using the tip of the index finger, it creates an amoeba. Dragging the finger in opposite directions, the amoeba splits into two parts. The TransWall was recently presented at the CHI conference held in Toronto (Canada) in early May.

According to the KAIST team, this screen can have many potential applications: education for schools, video games in the amusement parks, interactive museum Kiosks or even in hospitals to allow quarantined people to interact with their families or caregivers. However, currently, no commercial project is planned for TransWall.