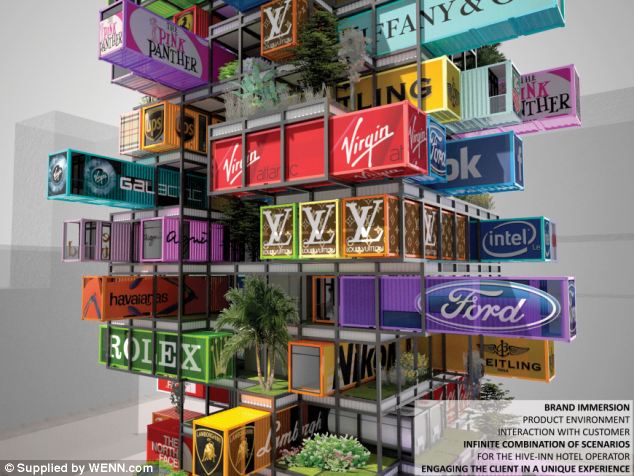 Imagine a hotel or a building that has tendency to expand and shrink in your locality with the names of famous brands on it. Well one such architecture has been designed by the Hong kong architect company OVA which has used the modular containers to make this building. The building looks like a Jenga game where different rooms can be mounted and un-mounted. Due to its modularity, the hotel keeps on changing its shape constantly. However, unlike Jenga game it is unlikely that a block tumbles because of the solid building frame. This whole Jenga like structure has been realized by recycling containers into rooms.

The rooms of the hotel can be used for advertisement displays as well as for accommodation. Thanks to the hive-like structures, the containers can be made to the slide in and out without disturbing other rooms. This building has caught the attention of some brands like Ferrari and some other fashion brands for advertisement purposes. The interested companies may not only use the exterior of a room for display but also change its interior. For example, the room given to a fashion brand could be decorated with its popular designs or if hired by a car designer, use an old car as furniture. The concept of modular building design is a strong candidate for Radical Innovation Awards.

Though this building is being used as a hotel but its role can be changed as required. In some emergency, it can be turned into a hospital or housing society. The concept of modular building gives the freedom to move your home, office or apartment wherever you go. The shape of the hotel depends on the partnership between the brands as it changes its shaped according to the situation.

The designer says, “The idea for their concept hotel lies in the maximum flexibility and mobility, a trend that is embodied in our modern way of life.” These Jenga styled buildings will surely be the next generation of housing and bill board advertisement. There is nothing decided about the price yet. The modular building has a lot to offer with its peculiar nature and style. We do hope soon it will be made available for brands so that fans of brand could enjoy this hive-like building.