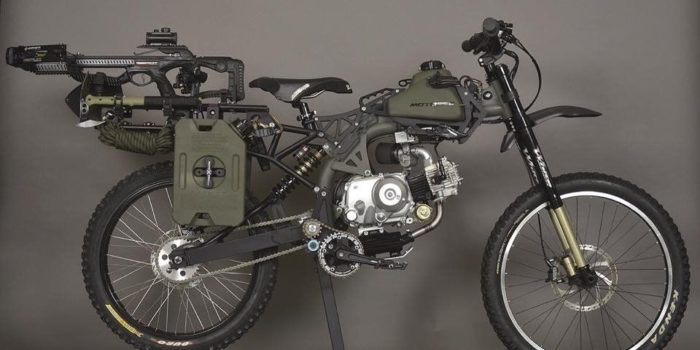 Some people like to be prepared for anything, but obviously some are much more prepared than others. A company has designed an incredible motorcycle which allows it to survive in the face of the worst murderers. We present this curious machine to you.

Surely more for making a buzz rather than saving the humanity, the Motoped company built an astonishing motorcycle, since it allows you to face an invasion of zombies. And the least we can say is that its designers have thought of everything. From its autonomy to its equipment, the Survival Bike prepares you for the worst.

The motorcycle is equipped with a 4-stroke engine with an energy saving system. Motoped engineers have gone even further on this last characteristic . By building their invention from a large number of bicycle parts, they made the Survival Bike more maneuverable, but above all, lighter, allowing it to spend less fuel.

More forward-looking than ever, the designers of the craft have equipped it with an array of tools to make Daryl (from the Walking Dead series  ) jealous. The Survival Bike is thus equipped with a GPS , a crossbow, a tomahawk, a saw with blade, several lighting systems, a shovel, climbing carabiners, a multifunction knife, a gas bottle and a machete!

However, it should be noted that this real war machine is acquired at a certain cost: $ 2,000 for the basic model. At this already high price, the most far-sighted can add the equipment they deem necessary.

This bike is truly incredible. As effective in attack as defense, it will prove to be a real asset if you are one day confronted with murderers.