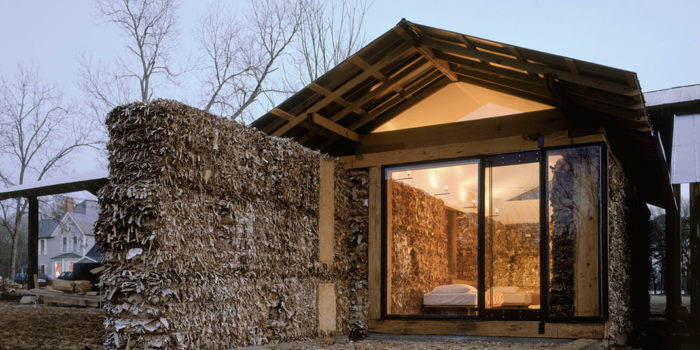 The economic crisis of 2008 had put a large number of people on the street. Due to the fault of declining income or the instability of the real estate or banking markets. But a group of young architects is trying to provide housing for as many people as possible by offering them a house at very low cost. We reveal more about this incredible project.

In 1993, American architects Dennis K. Ruth and Samuel Mockbee founded Rural Studio, an architectural program linked to the University of Auburn in Alabama. Later, in 2005, the two men used the know-how of university students to create an innovative project: the 20k House. It aims at the design of small houses at an affordable price and intended for the most underprivileged, in particular those struck by the crisis.

After many prototypes, the team completes the design of its first pilot project. In partnership with a commercial promoter outside Atlanta , in a small community called Serenbe, the students of Rural Studio build two houses of approximately 45 square meters and composed of one bedroom and a bathroom, all with materials whose price does not exceed $ 14,000 (approximately 11,000 euros) per building.

Added to the initial price of materials, Rural Studio estimates the cost of the labor required for construction to be approximately $ 6,000. Because even if the plans of the buildings are accessible to everyone and everyone can build their own accommodation (with the necessary knowledge, of course) the objective of the project is also to create jobs, always with a view to helping the most disadvantaged .

More concretely, the “20k” houses are covered with corrugated iron and wood, and raised on stilts. They are also designed with a passive air conditioning system (for heating and cooling) so that the home guarantees a low energy cost. Thus, the building makes the property accessible to people living on social assistance and not necessarily having the guarantees to obtain a credit.

And not to neglect the aesthetics of the project, Rural Studio has also worked on the appearance of the proposed houses. Future owners can thus choose their model from around twenty different versions or designs, and this for a similar price. On the other hand, to propose a low cost of construction, the designers used innovative techniques, cheaper and more ecological, which caused them to overcome some obstacles, in particular with regard to the legal standards in architecture and building.

Little by little, the “ 20k House ” project is being put in place. Even if, by the admission of Rural Studio, the total cost of one of these houses amounts to more than $ 20,000 with the construction, it must still provide the construction workers with a decent salary. But the buildings are still very affordable and allow social justice to be established through architecture. Also, students working on the project have the opportunity, with the program of the University of Auburn, to put their know-how at the service of a noble cause.

This project is really a great initiative. In addition to revolutionizing the construction and design of housing, it also helps the poorest to provide them with an aesthetic, ecological and decent home.

To help families in difficulty, these students built ecological houses at low cost