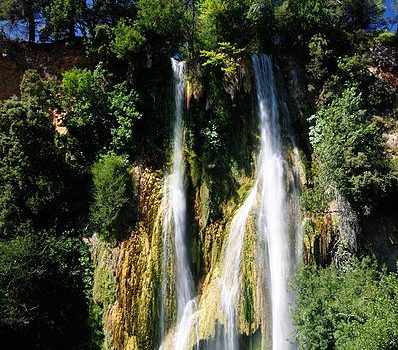 France is full of beautiful natural sites. Among these sites, we can find many waterfalls that real masterpieces of nature. Nestled in the heart of valleys and mountains, the most beautiful of them attract tourists from all over the world. Many people actually venture there to wander or to capture the beauty of these places in pictures.

Located in the department of Tarn-et-Garonne, near the town of Caylus, the petrifying waterfall is located on a small stream, at the level of a bridge. It is made of tuff, a type of crumbly limestone which covers the mosses and the pieces of wood which are there. This site is accessible all year round.

The Sautadet waterfalls are a series of waterfalls formed by the Cèze river. Located in the village of La Roque-sur-Cèze, in the Gard department in Occitanie. They were formed by the erosive action of the river on a large rocky mass. In summer, it is a very popular place for bathers. However, it is forbidden to swim near the waterfalls for safety reasons.

Located in the village of Péreyres in Ardèche, the Ray Pic waterfall is a known site since 1931. It made the Ray Pic volcano famous, which had one of the longest lava flows in France. It is made up of two falls. The first, which is not visible, is about sixty meters above the second which is 35 meters long. The river then flows over more than 20 kilometers. Following a landslide that claimed several lives, the site was closed to the public on August 10, 2009. After some consolidation work and securing the surroundings, its reopening was finally held on 1 st June 2012.

Coming from two streams with their source in the lakes of Ilay and Bonlieu, these waterfalls are made up of a series of waterfalls extending over 3.7 kilometers in length and 255 meters in elevation. We can identify seven waterfalls in all: the Fan (65 meters high), the Grand Saut, the Gour Bleu, the Château Garnier, the Saut de la Forge, the Moulin Jeunet and the Saut Girard (35 meters high). The latter have been classified under the protection of landscapes since April 2002. Consequently, the site is only accessible on foot.

Located in Sillans-la-Cascade, the Sillans waterfall is the property of the Var departmental council. Coming from the waters of Bresque, the waterfall falls from a height of 44 meters into a small emerald green lake. The site is accessible on foot. For security reasons, swimming in the basin has been prohibited since 2005 and access to the waterfall was closed on January 2011. After safety measures, the site in the heart of nature is visited by thousands of people on a daily basis.

Nicknamed the Queen of the Alps, the Rouget waterfall is a waterfall in the Giffre valley has an altitude of 960 meters. Particularly impressive at the time of the snowmelt, it is the second classified natural site most popular with visitors in the town of Sixt-Fer-à-Cheval. Located six kilometers from the village, the place is accessible from a small road passable by car in spring, summer and autumn. However, it is only accessible on foot in winter.

Also called Saut Claude Roy, the Billaude waterfalls are the set of two successive waterfalls with a total height of 28 meters. Located near the village of Vaudioux, they are among the most picturesque sites in the Jura. They are accessible from the D279 road. The site is located to the right of the road. However, visitors still have to walk a short distance before arriving on site.

Located in the remote Arbois, in the Jura department, in Bourgogne-Franche-Comté, the Tufs waterfall is a waterfall fed by the Cuisance, an underground river. The site is accessible to the public. You just have to take a hiking trail and a footbridge to get there

The Garvanie waterfall is the highest waterfall in mainland France and one of the largest in Europe. Located in the Garvanie cirque, in the Hautes-Pyrénées, it measures 423 meters in height. It belongs to the Pyrenees national park. The site is accessible on foot from the village of Gavarnie, which is 38 kilometers south of Argelès-Gazost.