Satellites are very useful in terms of their coverage and the provision of different services like broadcasting, remote sensing and  telecommunication links. But it is quite expensive and complex procedure to build and launch them into their respective orbits. Once, the satellites go into orbit we have limited control over them and they can only be used for the purpose for which they are launched. So, to fix all these problems a new concept of StratoBus is introduced.

It is neither satellite nor an airbus but in between these two technologies. Its name comes from the fact of that it hovers like an airship 20km above the ground in the stratosphere. It is being developed by a consortium led by Thales Alenia Space. According to reports, StratoBus will have be 70-100 meters long and 20-30 meters wide. To save it from UV rays, its surface is made of UV–resistant carbon fiber. It is equipped with 2 cell-powered motors that maintains its equilibrium in the worst condition of wind i.e. when the air is blowing at a speed of 90km/h.  The fuel tanks are placed at the bottom part of the ship. An electrolyzer is also used to obtain hydrogen from water. Communication, electronics and other important parts are also placed in the bottom compartment of the ship. The Stratobus can carry a maximum payload of 91Kg which can be changed depending on the type of the mission. 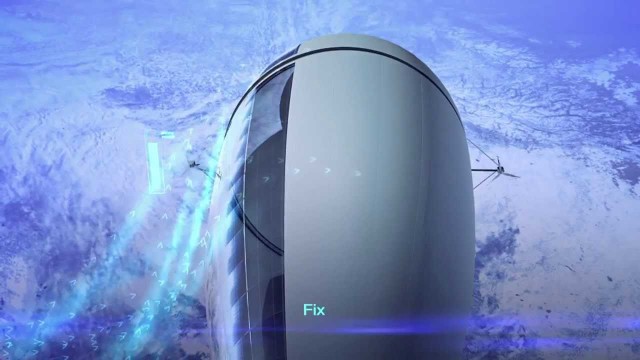 Solar power is the source of energy for electrolyzer. Working principle is; the rays of sunlight will enter the balloon via clear section and finally reflect off the concentrating mirror. These mirrors will then concentrate the light onto the solar panels which will remain illuminated in sunlight. This mechanism is as same as a satellite. The StratoBus is able to serve all those purposes which can be served by a satellite for example security, navigation, weather forecasting, TV broadcasting, Telecommunication and many more. StratoBus can last up to five years according to the prototype designed by Thales Alenia Space. The time taken to build this airship is also 5 years. Three more companies namely CEA-Liten, Airbus Defence & Space and Zodiac Marine are also contributing in the project. This project seems like project of Google known as Project Loon which aims to use balloons to provide internet access to the far flung areas.

According to Spokesman of Thales Alenia Space says the StratoBus has advantage over traditional balloons in terms of long term endurance as well as higher autonomy.