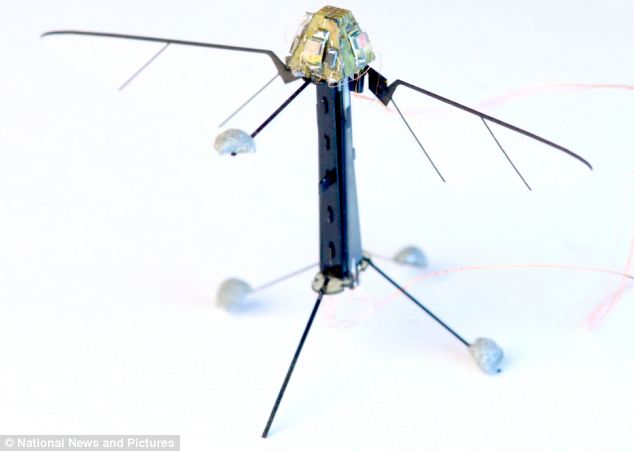 Harvard scientists have designed a carbon fiber Robo-fly which is claimed to be world’s smallest flying drone. It has electronic muscles to flap its wings. Owing to its small size it can have applications like in rescue operation, spying and pollination of crops etc.

Drones and drones everywhere with a wide range of applications and sizes. The drone technology is no doubt becoming popular these days. Now, a small robot with the size of a fly has been made and it is being claimed to be the world’s smallest drone. The amazing drone is named Robo-Fly and has a carbon fiber body with a weight of 106mg. The drone has a pair of electronically powered flapping wings. Do not judge it by its size, although it looks too lighter but it has tremendous use in search and rescue operation.

As the drone is so small that it can enter the small places so it can be used in search and evacuation operations. Due to its small it has multiple advantages and can be used in environmental monitoring and the pollination of the crops. Such a wonderful drone is going to have an impact on food production as well. The cute small drone is controlled with tether wire. The drone has few insects’ characteristics as well such as performing maneuvers. Here a question arises that what is the technology that keeps this lightweight drone stable in the air? Well, it is achieved through small sized light sensors.

It is for the first time that light sensors are used in such a small sized machine. The drone has been developed by the Harvard University researchers. The insect-inspired drone is only having onboard light sensors requiring no external cameras unlike earlier drones. The small drone has three occelli inspired light sensor eyes on the head which it uses for navigation and stability. The research has been published in the journal of Royal Society Interface, which reveals that four phototransistors are soldered on the circuit board. The circuit board is then folded giving a pyramid shape.

The ocelli inspired light sensors have been used by the scientists in an experiment to stabilize the drone which remained upright for 0.3 seconds. Earlier a number of other sensors had been tested that had potential to stabilize the drone during flight but not a single had succeeded. Dr. Sawyer is hopeful to see this robot one day while performing pollination of the crops.