Ukrainian based Michael Medvid has designed the world’s first connected projection watch. The watch is actually fitted with a projector that beams this information on your wrist. It notifies you about time, missed call, SMS messages, tweets, facebook posts and even e-mails.

Ukrainian based engineer Michael Medvid has made something that you won’t believe in. It is being considered the world’s first projection watch. The astonishing watch has been named as Ritot that not only tells you time but also lets you read texts, tweets and call alerts. The watch is actually fitted with a projector that beams this information on your wrist. The watch is connected with the smartphone via Bluetooth and time is presented on the fist by shaking or tapping the watch which lasts for 10 seconds.

Once the Ritot is connected with the smartphone, it displays the caller name, reminders, texts, tweets, facebook posts and even emails. Notifications colors of the app can easily be configured using the smart app installed in the mobile phone. To dismiss the beam, just shake your hand; it will automatically dismiss it. The wrist watch will vibrate if some update or notification is there keeping you updated all the time. Medvid has chosen Indeigogo as a funding platform with retail price of $160 while the cost on each bracelet is around $120. 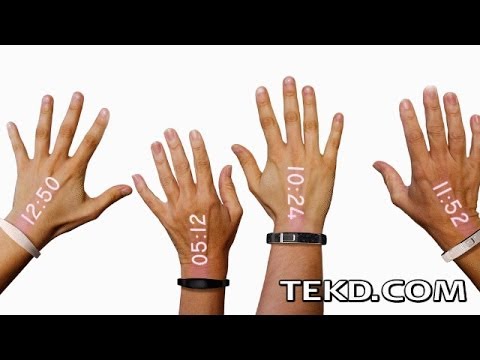 The crowd funding campaign has been started on kickstarter and will last till august 21. The campaign is a success as the designer had campaigned for $50,000 but have already collected $ 498,600.  Ritot comes in two forms; a bracelet and a sports band. The sports band is made up of plastic while the bracelet is made from leather. In sports version, the gadget comes in plenty of colors like green, red, blue  and yellow while in bracelet version, it comes in bronze and copper. The battery of the gadget lasts for one month on standby mode and 8 days on working mode. It is being expected that the sales will start in February next year.