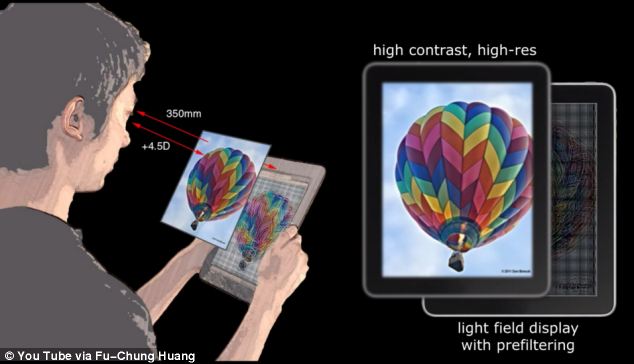 Scientists have developed an algorithm that adjusts the screen resolution automatically for visually impaired people. The algorithm can be used the people with far and short sightedness to use smartphones and tablets without glasses. We tell you more about this innovation.

Using glasses for mobiles and computers will soon be a the thing of past as scientists have developed an algorithm that adjusts the screen resolution automatically according to your eyesight. The algorithm will work for the eyes with the problems of short and long sightedness. You will no longer need glasses to enjoy the games and movies on the PC or tablets. This technology could be beneficial for millions of people across the world who need glasses to use PC or tablets.

Presbyopia is a type of farsightedness that diminishes the ability of focus as the time passes. The lenses of the eyes gradually loose their elasticity with the age. Some people have complex visual diseases such as higher order aberrations. This problem even can’t be solved by the glasses even, according to the Brian Barsky, a computer science professor at UC Berkeley and heading the project. The reason for the high order aberration is the disorderness in the shape of the cornea.

In the modern days, it is almost impossible to remain away from the screens; it has become a basic necessity at work. Many a people do jobs in which they have to look at the screens constantly and it becomes really essential for them to treat aberration. The technology can play a revolutionary role in transforming the lives of such people. MIT’s team also grouped with the UC Berkeley team to help them in the development of vision-correcting display. A pinhole screen is put in between the two thin layers of plastic for an iPod that increases the visibility of the screen. The pinholes are small in size with 75 micrometers.

The amazing work will be displayed during an international conference SIGGRAPH on 12th of august in Canada. The algorithm adjusts the direction of light based on the impairment of the user. The process of deconvolution makes the image brighter by passing the light through the glass in a particular manner. The image that appear to be blurred to a user due to eye impairments, after applying the proposed pinhole display, will appear sharp.