It is a great pleasure for the children to play with their parents but unfortunately sometimes parents are too busy to play with them. An inventor dad in Norway has developed a very elegant football robot that can can keep his son busy for hours. His three years old son, Torbjorn, is very happy to have this robotic football companion.

This hexapod robot named as MorpHex, can take many different shapes. It can fold its legs to look and roll itself like a round-shaped ball. It can transform itself into a spider using its six legs and scuttle slowly on a slope. Similarly, it can again take the shape of spider when chased by someone. MorpHex six legs can be folded and stretched to make it run on the ground. Even the robot can open its upside to have the shape of a Lotus flower. The idea of this robot came to the mind of Kare Harvelson, the inventor, when someone gave a Japanese toy as a gift to his son on his birth. He said he thought that he could build a better toy for his son then why not? 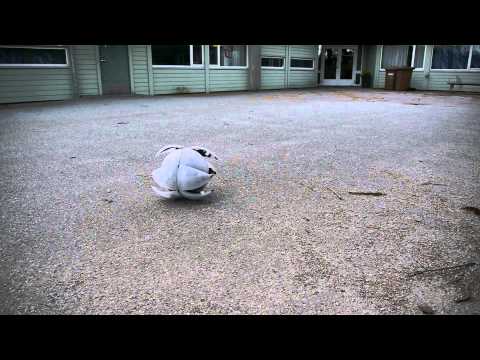 Engineer Harvelson is an engineer at Rogaland County council in Norway and has a passion for making robots. As far as he knows it is the first ever robot shaped like a footbal. He says, “My son is a big fan and making robots for him is a big motivation for him.”  He added, “He really loves them. Every day he wants one of them unpacked so that he can play with it. His favorite is the one I call A-pod because it looks like an ant.”

Making inventions is a hobby for him and he takes on different challenges and then tries to realize into reality. He says, “As far as I know I don’t think anyone’s made robots like this so it has unique challenges for me as an engineer, It’s the making of it that interests me, although I guess somebody will eventually find an application that it will be useful for.” A number of versions of this toy have been developed in USA while Torbjorn is the lucky one as he plays with the original ones.