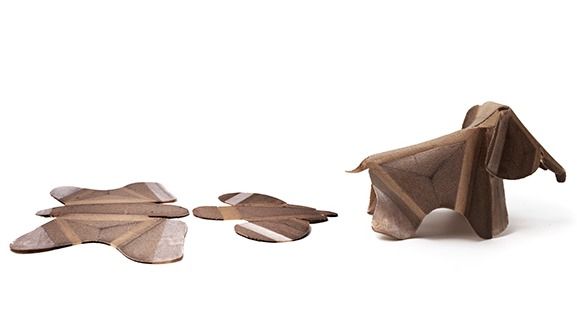 A team of researchers working at Massachusetts Institute of Technology is working on “programmable materials” that transforms its shape with change in effect of temperature or water. With simple technical processes, wood, carbon or textiles could be converted into objects that can self-assemble.

A team of researchers led by Professor Skylar Tibbits has found a way to program materials such as carbon, wood, the plastics and textiles that change their shape, appearance or function when in contact with water or depending on temperature. They have several compelling achievements to their credit, such as an elephant kit made ​​of wooden boards that self-assembles when exposed to moisture. We should also mention the carbon rear spoiler for the sports cars that is able to optimize its aerodynamics by changing its shape due to the heat caused by the friction of air at high speed.

A technology that could also be of relevance in aeronautics for the design of aircraft parts. “The soft materials are alloys that are designed to be highly dynamic in form and function, while also being inexpensive materials like the traditional materials. They are easy to make, can be shipped flat and then self-assemble “ can be read on the page for the  Self-Assembly Lab.

The main interest of this innovation is actually that it relies on conventional and less complex materials, which can allow its implementation on an industrial scale. MIT researchers speak of “4D printing”, where the fourth dimension is what they call dynamism conferred in these materials.

Although, we don’t see in very near future buying a furniture kit which self-assembles after being doused with water. Still the concept of soft materials is very promising. Large companies such as Airbus, Autodesk, Carbitex Briggs Automotive have decided to try this technique and funded the work of the Self-Assembly Lab.