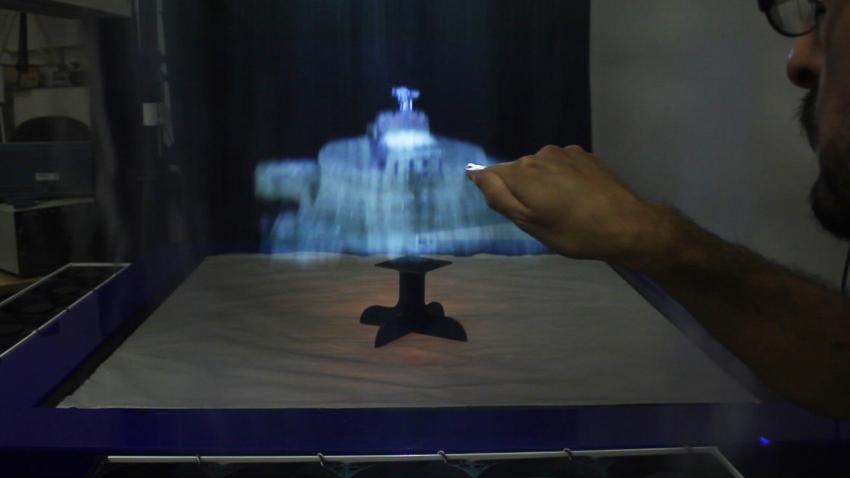 Fiction movies have always played an incredible role in advancement of technology. We have seen the Ideas from the fiction movies like James bond turned into a reality. Similarly, a movie back in 2002, Minority Report, introduced the idea of controlling the large screens via gestures which has also materialised, thanks to the scientists Professor. Sriram Subramanian and Dr. Diego Martinez. Both professors are working in the department of computer sciences at Bristol University. This screen is named as MisTable. Mistable has a touchscreen display with a  ‘curtain of mist’ surrounding it. You can move the pictures here and there and the direction & orientation might also be changed with the help of mist. The curtain of mist is prepared using a fog screen that works same as a touchscreen.

Images might be reoriented on fog screen before sending them to the touchscreen where they are controlled by gestures.  Once sent to the touch display, you can print it out or save it or you can manipulate it for further use. The designers can even collect the pictures form the screen, make changes and then return to the screen again. So the whole process can be reverted.

The screens are made transparent so that items could be seen from both the sides. Fog screens can be personalized as they offer customization and new ways of interaction. You can customize the fog screen for 2D contents and table screen for 3D contents. According to Professor Subramanian MisTable is unlike the conventional tables as you can interact with different scenes using different screens.

The inventors are hopeful to see its future as opening a new era of interaction and collaboration in the future. This technology is going to be presented in ACM CHI conference this month.