A team of researchers at the Korean National University has designed a high performance miniature sound sensor inspired from the sensory system of spider legs. This innovation can have have many promising applications like voice recognition, heart rhythm detection or earthquakes.

Here is an example of biomimicry. Researchers at the Korean National University have developed a sensor to detect the sounds and vibrations with high sensitivity. Its design is directly inspired from the sensory systems of spiders. This invention could be used for many applications in the field of speech recognition, monitoring vital functions or earthquakes.

Spiders of the Ctenidae family are able to perceive very low vibration several meters away through the hairs covering their bodies but especially due to the sensors that are in their paws. These are small parallel slits shaped cracks also called lyriformes organs that are extremely sensitive to sounds and vibrations. This is the alarm system used by these spiders to feel the presence of prey or danger. This complex biological phenomenon was described in 2009 by Professors Peter fratzl (Institute of Max Planck) and Friedrich Barth (University of Vienna). Korean scientists have relied on their work to recreate a mechanical version of this organ that they presented in their paper published in the journal Nature. 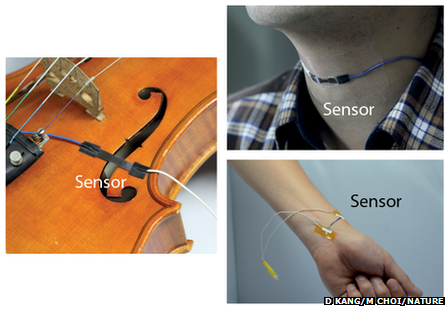 The sensor consists of a layer of 20 nanometer thick Platinum layer deposited on a viscoelastic polymer. The platinum layer is cut in parallel to mimic the cracks so that it can deform and stretch under the effect of vibration and sound waves. An electric current is sent to the platinum surface. In the absence of vibration, the cracks are closed and current flows on the whole surface. Once a small vibration occurs, the cracks open, changing the the conductance which is then measured.

To demonstrate the performance of their sensor, the researchers conducted a test by placing it on the neck over a dozen people. Each participant had to pronounce a words in a noisy sound environment. The sensor is able to record all the words without difficulty while a conventional microphone had difficulty to isolate the words from noise.  Another experiment was to mount the sensor on a violin playing the love’s greetings  by the British composer Edward Elgar (see the YouTube video below for this test details). It correctly recorded each of the note which was then subsequently digitized and replayed. Placed on the wrist of a person, the sensor could also measure heart beat reliably.

Korean researchers say they are able to configure the sensor sensitivity for different applications by varying the density of cracks made ​​in platinum film. For example, a sensor for measuring the heart rate does not need to be as sensitive as a version used for voice recognition. The system could also be adapted to create more efficient seismic. The researchers are also working to reduce the manufacturing cost by replacing platinum with copper or aluminum. They believe it will be marketed in next five years.