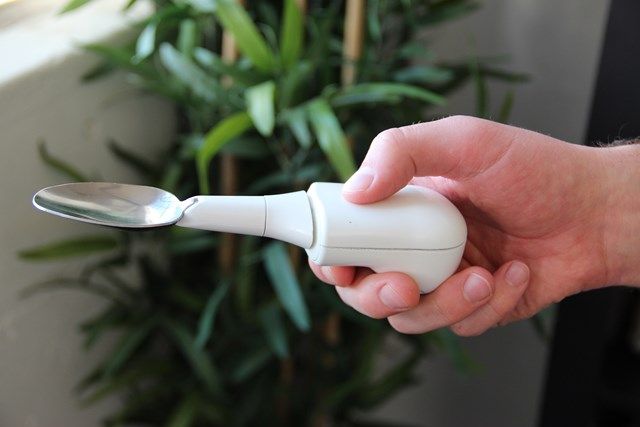 After the acquisition of North American company Lift Labs, Google has now begun marketing of an electronic spoon that will help people with tremor or Parkinson’s disease. Equipped with sensors and control algorithms, it detects the level of tremor and stabilizes to reduce them by 70%.

After contact lenses designed to measure blood sugar and pills to detect cancer, Google has invested in another health project. The US company has the ambition to improve the lives of people suffering from tremors, which are very disabling, especially at mealtimes. Lift Labs, a startup acquired by Google last September, has launched a smart spoon in the market that is able to reduce the tremors of the hand that holds it by 70%. Named as Liftware, it is sold online at price of $295 per item.

The spoon comes in with a large plastic handle which is infact an electronic platform with sensors to detect movements, a microcontroller, an electric micromotor and a battery. Algorithms assesses the intensity of the tremor and initiates counter movements to mitigate their effects. The device has a battery life of between three and six meals. The Liftware comes with a tablespoon tip, but can also be bought with fork or teaspoon.

The system is quite effective in preventing the food from dropping down and relieves the stress of the person affected. The results of the clinical trials conducted in the United States have been published in the journal of Movement Disorders .

Parkinson’s disease affects more than 10 million people around the world, this project also has a personal interest of Sergey Brin, one of the two founders of the company. Her mother suffers suffers from the same disease. He has also donated $50 million to the research devoted to this neurological disease.