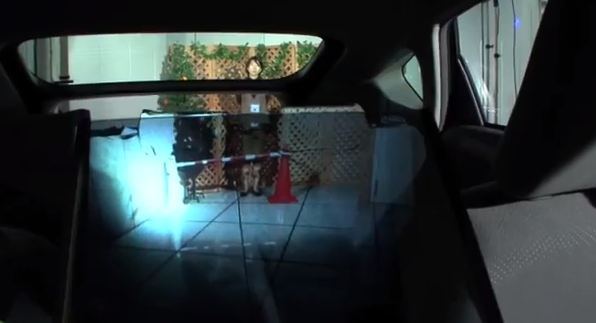 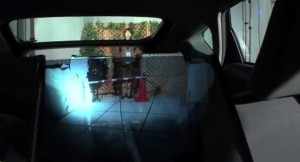 A research group at Keio University is developing a system that makes the back-seat of a car transparent.

The system achieves optical camouflage using recursive reflections. The technology was developed by Professor Masahiko Inami. This system has been optimized to make the rear view of the driver transparent, DigInfo TV reports.

“The main feature of our system is that it can makes the things appear as you can really see through them, rather than giving an indirect view of what’s behind. For example, using a system that shows things on a screen, you can understand the position of your car and barriers,as  it gives a sense of depth. ‘

In this system, video captured from the rear cameras is projected on a second screen using a mirror. The video is processed by a computer to make things look real, which gives the driver impression that the rear seat is really transparent.

“The screen is made of a special material called a recursive reflector. Optically, it has an interesting feature because it reflects light in the direction of incidence. When we thought to apply to the car, it gives a clear picture in daylight, rather than in a dark place. ‘

Currently, only the rear seat has been made transparent, but ultimately, the goal is to make the interior completely transparent. This will give a 360 degrees view, without blind spots.

“But from now on, we would continue to increase the number of transparent views. We expect the system to be easily usable by anyone. ‘

“We are discussing the possibility of collaborating with other auto makers. There are many unanswered questions in this research. We would like to work with a variety of businesses. We hope to offer a commercial version in about five years. ‘