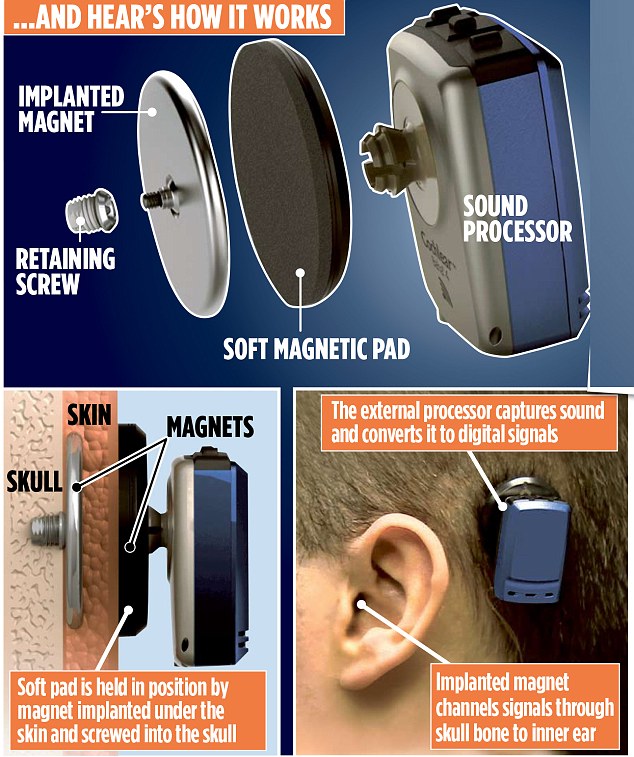 A new magnetic implant has been used to restore the hearing of a young TV star, Billy Coughlin. Besides the star, the technology is also a beacon of hope for thousands of others. The technology used is the new version of Bone Anchored Hearing Aid (BAHA).

A magnetic implant has been invented that restored the hearing of a young TV star, Billy Coughlin. He lost hearing of one of his ears when he was 17. He is now even able to listen to the sound of footsteps and much more. The operation was done in Heartlands Hospital, Birmingham. He is now feeling normal with the new magnetic implant. The technology is also a hope for those people, for whom cure is not possible with traditional hearing aids. This technology is a continuation of Bone Anchored Hearing Aid (BAHA) technology.

The operation of the implant involves the use of magnetic disc and screw inside the brain skin to channel vibrations into the ear. On the outside, a magnetic plate is attached under the ear (as shown in the figure). The plate can be coupled with an electric sound processor. The processor is similar to the traditional Bluetooth earpiece and the transplant is invisible when the outside magnet and the processor are not worn. Billy Coughlin had lost complete hearing of his left ear because of an infection named mastoiditis. His right ear was fully functional and audible. Surgeon Mathew Trotter did the operation and restored his hearing completely after fitting the magnetic implant.

According to the surgeon, the treatment solely depends on the cause of losing hearing. The technology is fruitful for patients with infections or injury in the middle and outer parts of the ear. The reason for the fact is that the traditional implants can’t make the sound reach the inner of the ear.  It is also worth mentioning that this magnetic implant is not a cochlear implant. The method is similar to the dental implant in which the bones are integrated with the screw to make it non-removable and secure. The screw transmits the signal received from the air using earprocessor and sends it to the inner ear.

A 40 minutes surgery was carried out under normal anesthesia to fix the implant. A semi-circular cut was made under the ear to place the equipment 2 inches deep. The screw and magnet are attached together tightly. On the average, it is expected about 15000 hearing patients will be benefit from the BAHA technology every year in the UK. The surgeon is hopeful that one day it will be used in the whole NHS.