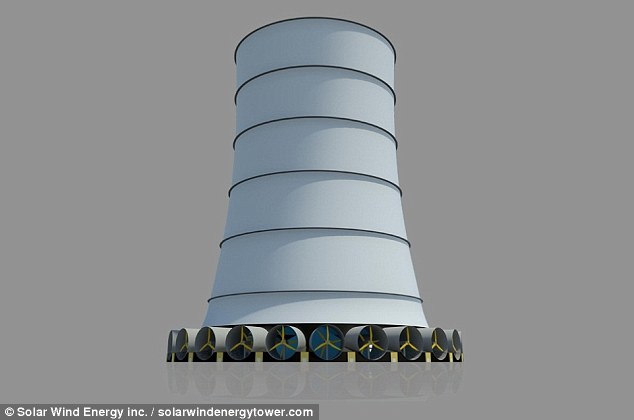 Solar Wind Energy Inc. is going to build half a mile high tower to produce electricity. The tower can produce same electricity as 1,00,000 wind turbines. During a clear sunny day, the production of the system is about 1250 megawatt-hours.

Permission has finally been granted to a Maryland based company to build a giant looking tower to produce electricity. The company named as Solar Wind Energy Inc. thinks that the growing energy crisis could be solved by constructing a huge solar-wind energy tower. The tower will be half a mile tall. The company claims that the tower can produce electricity equal to 1, 00,000 wind turbines. However, the tall tower will look odd but if true it will have power generation capacity equal to that of Hoover dam in USA.

The working of the tower is simple; it showers the water from the top which makes the water heavier. The water falls down and runs 120 turbines mounted at the bottom of the tower. During a clear sunny day, the production of the system is about 1250 megawatt-hours. Interestingly, the system does not rely on the weather conditions and is able to operate fully irrespective of the day and night time. The technology is named Downdraft which is quite old but company has added some new features to make it more efficient.

On the other side, the main disadvantage of the technology is its size and construction cost. Each block costs up to US$ 1.5 billion almost. However, the project is granted permission to operate in Luis, Arizona. The company wishes to see its widespread use across the world including Chili, India and Middle East. To materialize the project, National Standard Finance has made initial funding so that the project could be started. The company has shown enthusiasm in building multiple such towers and to promote renewable energy.

According to the company, the construction of tower can be achieved using the conventional materials and engineering equipment with the available local manpower. The company further adds that the construction of such tower will greatly benefit the local economy by creating new jobs in construction, manufacturing and transportation etc. This method provides energy more cleaner power than nuclear means.  Let us see when this project gets completed, how does it serve the nation.