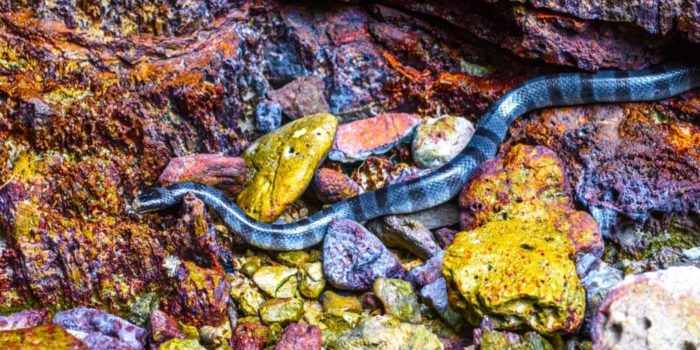 Nature is ruthless for animals, and animals have many tools to attack and defend themselves. Among them, unique predators of their kind: poisonous snakes. We present 10 of the most dangerous snakes in the world.

The black mamba has a hue that varies from gray to green, it actually takes its name from the black coloring of the inside of its mouth. Many consider it the deadliest snake in the world, mainly because it is the fastest (up to 20 km/h on the ground) and the most aggressive of all. Above all, it injects a large amount of venom which can kill prey in 15 minutes.

The Indian cobra or Spectacled cobra is found mainly in South Asia . Since it comes out mainly at night and at dusk, but also because it has a very efficient venom and a remarkable speed, it is the most dangerous snake in Asia .

The striking viper has one of the fastest attacks in the world and is responsible for the majority of snakebite injuries in Africa , where it is mainly found. Mainly nocturnal, it can kill a man in 25 hours by its bite.

Able to move in trees and in water, the Bothrops asper is able to camouflage itself very well, especially thanks to its natural color. By its proximity to human explorations and its toxicity, it is the most deadly snake in Latin America .

The brown snake is a particularly aggressive and one of the most venomous reptiles in the world. It is mainly found in Oceania where it kills many people. Indeed, the animal has the habit of slipping into houses and other inhabited places, involving numerous confrontations with Man.

Very widespread in Australia and New Guinea , the death viper is, as its name suggests, fierce and very dangerous and even attacks other snakes. When it hunts, it hides in the sand to attack its prey and injects venom which kills its victim in less than 6 hours.

Endemic in Australia , the desert taipan is considered by many to be the most venomous land snake in the world by the toxicity of its venom and its rapidity of action. Despite everything, the animal is rather passive and discreet and easily flees when faced with a threat.

The Texas rattlesnake , or diamondback rattlesnake , can be recognized by its characteristic hiss. Relatively not very aggressive, it is all the same the most dangerous species of snake in North America , in particular thanks to its large size (almost two meters on average) and its speed of action.

The tiger snake owes its name to its appearance with yellow stripes. Like the desert taïpan , it is an endemic specie in Australia . Not very aggressive towards humans, it still has a powerful venom and a rapidity of action which make it relatively dangerous.

The Belcher’s snake is the only marine species in this classification. But it is also the one with the most deadly venom, since a few milligrams can kill 1000 people. On the other hand, this reptile is relatively passive and only attacks if it feels threatened.

All these reptiles are absolutely formidable. Each with different techniques and prey, they are undoubtedly one of the deadliest predators in their food chain.