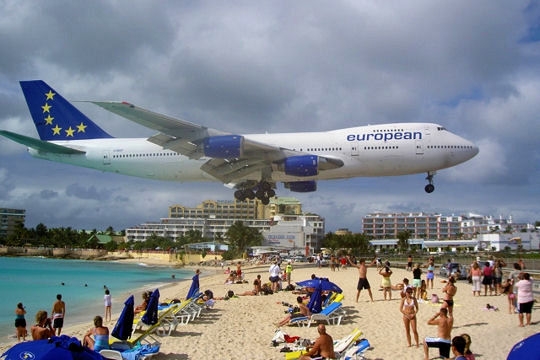 The majority of the passengers consider the landing and taking off as the most difficult moment of their flight. This moment becomes particularly terrifying when runway is very short or the geographical conditions are extreme.

This airport provides a unique view to the passengers of the aircraft. The aircraft when approaching the runway,  flies very close to the one of the beaches, just 10 meters away.

The Japanese Kansai International Airport has the distinction of being made on an artificial island in Osaka Bay, 50 kilometers south-west of Kansai. The 1.7 km building of the terminal is the longest in the world. The island is accessible from the road by a bridge that connects the airport to the fast lane. In operation since 1994, experts of global warming do not give this airport an age of more than 50 years.

Surrounded by mountains, the Toncontin International Airport in Tegucigalpa, capital of Honduras, is considered one of the most dangerous in the world. It has one of the shortest runways in the world. Not to mention that during landing approach, the aircraft is obliged to make a 45-degree angle to turn in a basin surrounded by hills that are few meters away. The runway is inclined to 1.06 ° to shorten the braking distance.

In Gibraltar airport, in order to take off, the plane must traverse a runway a part of which consists of road used by motorists. In fact,  the airport was designed city centre due to the lack of space, dividing the city into two. This short runway track with a length of 1829 meters ends on a sea and can not receive too large aircraft.

Lukla airport in the Khumbu region of Nepal, is the destination for adventurers who want to climb Mount Everest or visit the Himalayas. It is located about 2860 meters above sea level, the airfield has a runway 500 meters long with a slope of 12 °. It receives only local companies, making transfers from the international airport in Kathmandu.

Airport is located  Caribbean island of Saba, east of Puerto Rico. This airport is famous among aviators because of strong side winds that sweep the very short runway track ending in the sea. The runway very is surrounded by mountains on one side and the sea on the other. Only 3 type of aircraft models are allowed to use this airstrip.

The pilots of aircraft approaching the landing strip of Funchal airport in Madeira have to master their aircraft and make acrobatic manuever to land their aircraft. The runway is surrounded by mountains. In 2000, the airport runway was extended using 180 concrete pillars, allowing it to encroach on the sea.

If you want to go in Bhutan, you can not escape this unique airport. Located near the town of Paro, it is surrounded by mountains with a peak altitude of 2235 meters. Only eight bhutanese pilots of the national carrier Druk Air are allowed to land there.

In the middle of the Alps, the airfield Courchevel has one of the shortest runway in the world, with a length of 525 meters the airstrip has an inclination of 18.5 ° to slow planes during landing. The approach for the landing is even dangerous for the most experienced pilots.

Saint Barthélemy Airport, located in carribean, has a runway of just 640-meter track and can only accommodate small aircraft with 20 seats. The track ends in the sea and sometimes aicraft plunge into water as they take off too late, very little room for pilots.

Located in the shallow bay of Traigh Mhòr at the north tip of the island of Barra, this regional airport of Scotland is actually a beach on which three runways are marked by simple wooden posts. The aircraft only land there at low tide as at high tide the runways are covered by the sea.