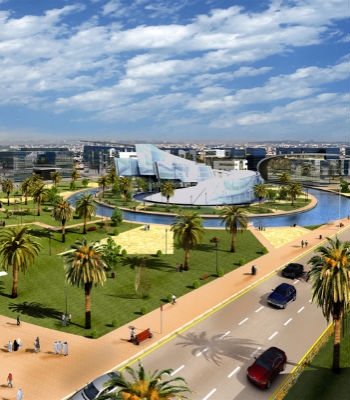 With the unavoidable and imminent growth of human population there is a strong need for new housing projects, cities and transportation means. This article presents top 15 such major innovative urban projects of future from around the world.

This project was first proposed in 2010 and strongly interested the city of New York. In the New York bay, four rectangular swimming pools will be built in the form a cross. Each pool will filter River Hudson water and make it fit for swimming. The project will take six months to complete with a cost of $1 million. A website for the public funding of this project has been launched and the work is expected to start by August, 2014.

Named as the Bosphorus tunnel, this future Eurasian tunnel will be 5.4 km long and built with a cost of 800 million euros. It will be in the form of a double bridge between the neighbourhoods of Kazlicesme and Goztepe of Istanbul. This tunnel is a part of a 14.6 km road project designed to alleviate the overloaded traffic in the Turkish capital. Work has already begun in February 2011 and should be completed in 2014. The travel time will be reduced from 100 to 15 minutes from one bank of Bosphorus to another.

The energy city is under construction just outside Doha, capital of Qatar. It is 20 kilometers to the north of Doha International Airport and is designed to accommodate companies working in the oil, gas and hydrocarbons. In the first phase an area of 720,000 m2 will be developed and host 20,000 people in 92 buildings. An optical fiber network will be developed for the communication between different buildings. The buildings will be powered using solar energy. This high tech building project will cost nearly $2 billion. The construction was started in 2006 but delayed due to global financial crisis.

The prospect of the World Football Cup 2014 and 2016 Olympic Games in the Brazilian capital of Rio de Janeiro, have triggered a wave of major construction works in the city. TransOlimpica Bus Rapid Transit is a 2×3 lane highway with a length of 26 miles long. This auto route. serviced by 18 stations of the route, will connect the neighbourhood of Barra da Tijuca to the south, with Salvador Allende airport at Deodoro in the north. The auto route of Transoeste will connect the eastern and western part of Rio. The first section of the route is 56 km, which includes 53 stations and was inaugurated in June 2012. The cost of each project is estimated at over 300 million.

5. Tianjin : The green city of tomorrow

Tianjin, the green city of tomorrow is being built in northern China. This eco-city of 30 km2 is built in collaboration with Singapore. The concept is simple: a pleasant and environmentally friendly city. Under construction since 2007, it continues to grow. Its down town consists of a huge urban park near a lake and is easily accessible form the city on foot and cycle. The down town will be surrounded by a mix of housing, shops and office buildings. Several wind turbines will provide the electrical power to the city. Eventually, Tianjin Eco City will accommodate 350,000 residents.

6. A Road-Rail Tunnel Between Sweden and Denmark

A huge urban development plan is launched in Toronto that will extend over 25 years. 800 hectares of brownfield sites will be rehabilitated. The new waterfront project includes 40,000 new homes, office space for 40,000 workers and 300 acres of parks and recreational areas. The buildings will be certified to be environmental friendly. Several new areas are already under construction , for example, East Bayfront and West Don Lands. Considered as the largest urban renewal plan in North America, the project will cost 22 billion euros. The work began in 2001 and work will continue at least until 2021.

8. A transparent bridge in Liverpool

Currently, the Silver Jubilee bridge is the only bridge near Liverpool to cross River Mersey . The construction of a new bridge, called Mersey Gateway, will allow to split the traffic between the two bridges. The cable supported bridge will measure one kilometre long and include 2×3 traffic lanes. The cables will be attached to 135 meter high towers. The three pillars placed in the river, will span 300 meters. Its design is thought to be as transparent as possible and respectful  to landscape. It will cost around 2 billion euros.

Within 20 years, the population of Tijuana, Mexico will double. This will put an enormous strain on the housing. Hence, the city has decided in 2007 to create new urban areas.Valle San Pedro is the largest such development project on the area of 13,000 hectares. It will accommodate one million people by 2030, mainly low-income workers.

First new city will be fully certified for sustainable urban development and it will possess innovative public facilities including waste treatment and water, schools, shopping centres, hospitals, parks and offices. The city will also include an industrial area of ​​200 hectares.

10: The new Istanbul Down Town

The plan for the new Istanbul down town, Kartal Pendik , is designed by the architectural firm of Zaha Hadid, The proposed down town Istanbul again is very innovative. Kartal Pendik will be built on 555 hectares of industrial wasteland, on the Bosphorus. At the the heart of down town, will be a high end  business centre surrounded by cultural buildings, such as concert halls, museums and theatres. The project also include a marina and hotels. The total area of the building will be 6 million m2. Announced in 2006, the project is being developed.

This new underground metro is a huge project to improve the lives of thousands of commuters in New York. It will reduce by 40-minutes the travel time between Sunnyside in Queens and Manhattan. This new train line, completely underground, will have one dedicated terminal in the Grand Central Station and one in Pennsylvania Station. Several tunnels are being drilled. The work started in 2006 and has been delayed several times. The project will cost 6.2 billion euros and is expected to complete in August 2019.

The Colombia facing a massive exodus of rural population towards the urban areas, has launched a program for creating small towns along the major urban centers. Ciudad Verde is a new city on the suburbs of the capital Bogota. Covering an area of ​​328 hectares, it will include 57 acres of parks and green spaces. 42,000 homes are being constructed to house 160,000 people.

Launched in 2007, the project is well on its way and hundreds of homes are for sale. The city will be connected to a Bogota by a rapid bus TransMilenio. The project will be be completed in 2016.

The city of Golden Coast, in the state of Queensland in Australia, will experience a major increase in traffic and congestion. This has motivated the city planners to build an extensive tram network. Tram will run on a single 13 km long line, a major part of which will be along the beach. The construction work that began in 2012 will to be completed in mid-2014. Open 24h/24 it will possess 16 stations and transport 10,000 passengers per hour. The project is estimated to cost $1 billion.

14. A submarine tunnel for Miami

For several years, the Miami suffered from traffic congestion. A huge submarine tunnel project aims to de congest the Port Boulevard Bridge, which connects the North of the city to the south. The new dual under water tunnel, built in the port of Miami, will open in 2014. The new Port of Miami tunnel is 1.2 km long and has two lanes in each direction. This tunnel will help divert traffic passing the down town. Built 12 meters under water, it will create a second access road to the marine terminal for trucks and divert traffic from down town. From a public-private partnership, the project will cost 454 million euros. Work began in May 2010 and commissioning is scheduled for May 2014.

Kuwait city has been a victim of big traffic jams. Hence, the planning authorities have launched a major project to build underground metro. The work will be completed in five phases. The first phase includes 50 km of lines and 28 stations. Driver less metros will run at 90 km/h. The total cost of the project will be around $10 billion. With the completion of fifth phase the final four lines network is expected to reach 171 km and 69 stations. The first phase approved and funded should be commissioned in 2020.