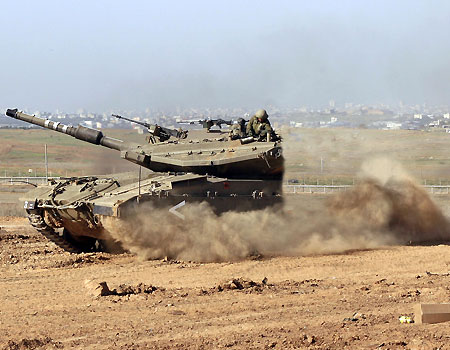 British military scientists have succeeded in making tanks invisible in the eyes of infra-red and thermal sensors.

It has always been a fantasy of  military commanders to advance against an enemy without being seen. However, this fantasy will soon be realized. The Telegraph has reported that British military scientist have succeeded in making the tank invisible, using a technology named “Adaptiv”.  Adpativ technology has been developed as result of the joint collaboration between British BAE and swedish defence. The tanks have become  ​​invisible to infra-red sensors and can even change their physical appearance.

Adapativ technology is composed of more than a thousand thermoelectric hexagonal metal tiles. These tiles regulate the temperature in the tank to match it with that of its immediate environment. The camouflage works best at a distance of 300-400 meters from the enemy. The research into this technique was initiated in the late 1990s in Sweden. The researchers studied the threat posed by the proliferation of thermal sensors and opportunities to thwart this threat. The system has also the ability to change the appearance of the tank as seen by a thermal camera. For example, in polar areas it can produce the heat signature of a polar bear.
.
The thermoelectric tiles can also act as hard armor plating. Using this technology, the soldiers can also write cool messages on the side of the tank like “USAF 4 HALF-LIFE 3” or “PC GAMERS SUCK.” It is expected that this technology can be commercialized within two years and can be used for the vehicles other than tanks.
A video of the tank can be seen here.
Advertisement