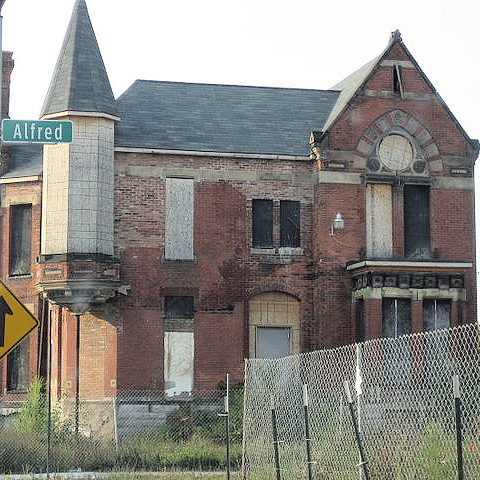 In recent years, real estate development had spurred growth in many countries of the world. However, the mirage ended with the bursting of the real estate bubble. Nothing seemed to stop the bankruptcy of real-estate developers and promoters who had embarked upon extensive projects funded by bank loans. On other hand, many houses holds who had taken loans to buy homes collapsed. This resulted in many new unfinished cities and thousands of vacant apartments at a time when banks are more reluctant than ever to give credit. From California to Inner Mongolia, discover these new ghost towns.

1. The New Seseña, near Madrid, Spain

Forty kilometers south of Madrid, “The New Seseña” is an example of the collapse of the Spanish property market. It also symbolizes the megalomania of its  promoter, Francisco Hernando. In 2008, ruined by the crisis, he was forced to stop the construction of 13 500 apartments which he had named “The New Seseña”. Only 3,500 homes were completed and found no buyers.

2. Kangbashi’s, the most famous ghost town of China

Designed as an extension of the city of Ordos in inner Mongolia, Kangbashi is the most famous ghost town of China. As a result of rush to develop the coal mining industry in the 1990s, the city of Ordos saw great expansion. On the website of the city, the authorities announced that the district Kangbashi will host new political, cultural, economic, scientific and educational institutions. But the high prices of homes discourages potential buyers. The city was constructed to house about one million people but only 30,000 have arrived in Kangbashi. Many buildings remain unfinished and the unsold apartments buildings surround the Genghis Khan square.

3. Kilamba, the ghost town built by China in Angola

Located thirty kilometers from Luanda, the Angolan capital, the new city of Kilamba owes its existence to the China International Trust and Investment Corporation (CITIC). According to the BBC, the site has cost $ 3.5 million to the company. The china did this investment as it was interested in Angolan oil.

Designed to accommodate over half a million inhabitants, the city covers 5000 hectares. The city has become a ghost town as few Angolans can afford high prices of apartments ranging from 120 000 to 200 000 dollars. In fact, two thirds of them live on less than $ 2 a day.

4.Valdeluz, a Spanish city deserted four years after its construction

Located in the province of Guadalajara, the city was designed to accommodate more than 30,000 people. The proximity to Madrid, which is about sixty miles north, was one of the main attractions of this urban complex whose construction began in 2004. However, till 2011 only 1200 people live there. A shopping center of 900 m2 was built in the city to give it a new life.

The city of Stockton is called the  “City of foreclosures” by the American Press. The bursting of the real estate bubble has precipitated in the decline of Stockton, which now has a record number of foreclosures. According to the Huffington Post, in 2010, one in ten houses suffered foreclosure. Now deserted, the city filed for bankruptcy in June 2012.

6. Keshcarrigan, a ghost town in Ireland

Before the economic crisis, Keshcarrigan city had embarked on major real estate development projects. However, with crisis many developers left the buildings in this small village in Leitrim County unfinished. Overall, in Ireland, the number of deserted houses has sky rocketed. In October 2010, according to a report by the Ministry of Environment, there are 33,000 vacant housing across the country.

Once viewed as the birthplace of the American automobile industry, the city is now facing the decline of the industry. In August 2012, the unemployment in the city reached 19.6%. In this context, it is not surprising that workers are leaving the city. Despite a relatively low price per square meter, homes do not attract the interest of potential buyers. According to RealtyTrac, which lists foreclosures houses, in 2012 more than 5,000 house holds could not finish paying debts and 263 homes are about to be confiscated.

8. Galway, the ghost county in Ireland

Like Spain, Ireland has not been spared the adverse effects caused by the bursting of the housing bubble. Located in the province of Connacht, County Galway, the city covers 6148 square kilometers. Since late 2007, the property prices there fell by almost 45%.

Now, the desertion of some neighbourhoods gives this area the look of ghost county. The desertion of buildings is not without public safety problems. In February, a two year old child was killed by falling into a ravine in Athlone, a ghost town in the Midlands. A news story that sparked national outrage.

9. Dantu, the Chinese city half empty

In China, new cities have increased in recent years. However, most of them turned into ghost towns just after their completion. This is the case of Dantu district, in the province of Zhenjiang. Many of the city streets have never been inhabited.

The nationwide sheer number of deserted houses is alarming. A report published in 2010 by the Chinese State Grid Corporation, the largest state electricity supplier, states that there are about 65 million empty houses in China. In Zhengzhou, colossal industrial buildings sprang up but were never used.