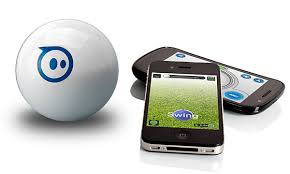 A new revolutionary robotic ball has been added in the list of robotic games. You can now enjoy rolling the robotic ball using a smartphone app. The ball is named Sphero and is able to move between the objects and entertain the pets. The interesting ball can gain the top speed of 5mph or 0.6 km/h. Sphero is totally water-resistant with a size of 2.8-inches and is currently available in UK and USA. The ball costs only $99.99. This ball comes in many different colours and weighs only 178g.

The app developed for the ball is compatible with both the iOS and Android and uses Bluetooth to communicate with the ball. The ball can jump over the hurdles in the way and even can jump over a ramp. The robotic ball resembles a tennis ball or a mini basketball. The ball is made of polycarbonate and its waterproof characteristics would inspire the future generation of computer games. There are about 30 games available with the app including driving, arcade games and many other sports. The robotic ball can help the students in the classroom to help in understanding about the robots.

The ball is made by a robotic company Orbotix which is based in New Mexico and owned by a software engineer, Ian Bernstein, along with Adam Wilson. Both the owners have passion for robots. The software engineer says, “When we started at Orbotix we wanted to create a physical object that was controlled by a smartphone or tablet. We were inspired when I said ‘we need something simple that you can pull out of your pocket, throw it on the table, and it would do something cool.” The robotic ball can be charged with a wireless charger and the range covered by the BlueTooth adapter is 50m.

According to Adam, Sphero can be characterised as a blank slate. It can be used in many different types of games and only the user creativity is the limit. Its use is quite simple. Charged with a wireless charger, the ball connects through Bluetooth to your smartphone and the tablet. Then you can start having fun by playing with this ball by moving it around and changing its colours.