A new football that is also able to guide the players as coach is indeed a dream come true. This smart football has been introduced by Adidas with advanced sensors. These sensors help it to keep track of the trajectories, the force applied and the point at which force applied, for example, during penalties and corner points. The smartphone can be connected with the smart football via BlueTooth and teaches the players how hard to kick or the controlling tactics.  An app named as miCoach is used which also stores the data for use afterwards. 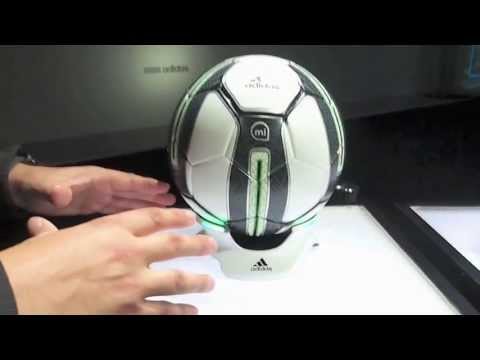 The data collected from the miCoach can help in assessing the penalties and how to avoid injuries. With each kick hit on the football, the data is stored which reveals the amount of spin, speed and flight path. The smart football is made available in the US and UK at the Adidas and Apple stores against the cost of $299. The amazing football can be charged with a wireless charger. Furthermore, the smartphone also provides a tutorial to teach the users to get trained with new techniques. One such technique is called Knuckleball which basically is developed by Eddie Cicotte. The technique is to hold the ball in knuckles to avoid the rotational spin.

Another such technique used by the two famous footballers David Beckham and Gareth Bale involves hitting the ball, on a sweetspot, just above the equator with a toe. If a hit is made like this, the football reaches at a maximum height and then drops sharply. The app also has a section known as Challenge Yourself that teaches you how to kick the ball to achieve professional level competence.

The app also contains a record book that saves the epic kicks to take help afterwards and improve the performance. The smart football is an awesome way to learn the football in an effective way. It would surely help in learning the football tricks and techniques.