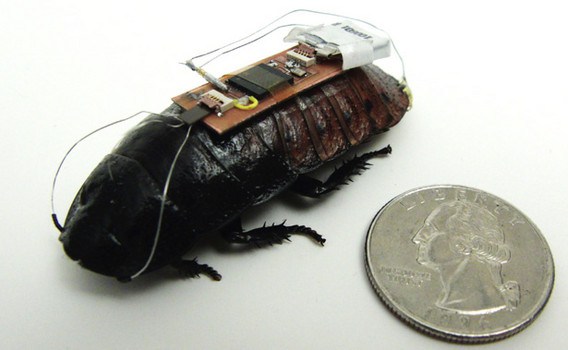 The presence of Cockroaches may be disgusting and repugnant to the home owners but they have the quality of being amazingly tough and ability to creep into the tiny places. It would have been ideal for the scientists to have a robot of the size of the cockroach, equipped with cameras to monitor the places where other robots or even humans cannot go. For example, such robots can save human lives in the case of disasters like earthquakes. But  designing a robot of this small size is really challenging.

A real breakthrough has been achieved by scientists at North Carolina State University.  They have been able to control the real living cockroaches. The real cockroaches have the ability to perform in extremely hostile environments.

The Madagascar hissing cockroaches have been fitted with “backpacks” that contains a commercial off-the-shelf chip, a micro controller and a wireless transmitter and receiver.

The video below shows how scientists are controlling a cockroach to make it follow a curved line..