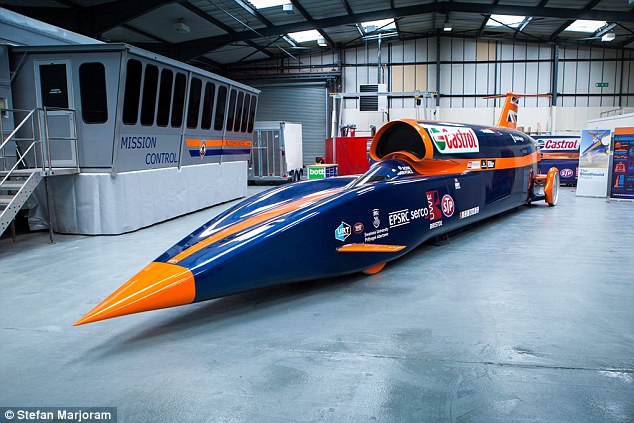 World’s most powerful brakes are required to stop the world’s fastest car. Scientist in Bristol have figured out a way to do so. The parachutes will bring the car to a slower speed of 260 km/hour. Steel rotors will then be used to brake the car which can survive at high temperatures.

Off course, controlling the world’s fastest car requires the world’s most powerful brakes. A team of engineers in Bristol have come up with a way to stop the car with a speed of one thousand miles/h. Bringing speed of such a vehicle to almost zero is not an easy task indeed. Bloodhound Super Sonic Car is a car that can travel with a magical speed of 1000 miles/h. To stop this car, a team has figured out a way at last.

The parachutes will bring the car to a slower speed of 260km/h. Then to bring this speed to the normal speed, a constant 3G deceleration is done which is also applied in normal cars. However, it is a big issue to bring the speed to the zero because even at this speed, the wheels of the car are spinning at the speed 10,000 rounds/minute.  The speedy car is still in the development phase and will be showcased very soon. The car is given this name because of the fact that the car is faster than sound waves.

In the beginning, the idea was to use jet fighter’s carbon rotors to stop the car but they shattered at half the speed. So, the team thought to figure out some new way to combat this issue and used steel rotors which survived at high temperatures. The steel rotors proved to be more promising and durable. Next target is to use them under the test with 10,000 rpm which is the actual speed of the Bloodhound SSC. It is expected that these rotors will be able to work efficiently.

The current speed record of the fastest car is 1227.895 km/hour made by RAF pilot Andy Green in 1997 with thrust SSC. He will drive this new car as well and it is being hoped that the car will be breaking the world record for speed. The car only takes only 55 seconds to reach its top speed and the drag on the car is 20 tons.