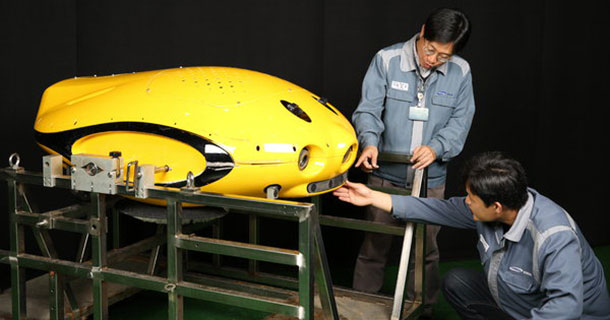 People with knowledge of naval and merchant ships know very well that hull cleaning significantly increases the cost of ship building and its operation. In this context, Samsung Heavy Industries has just developed its new revolutionary robot to clean the ship hulls. In fact, the robot of the Korean giant is a submersible drone which is more efficient and cost-effective in hull cleaning as compared to current teachniques in practice.

Fouling is a natural phenomenon that results in the attachment of organic materials to a boat hull, as a result of activity of parasitic organisms like shellfish, limnories and borers. These bioorganismes gradually deteriorate the surface of the hull, whether it is made of wood or metal.

Samsung Heavy Industries, specializing in shipbuilding, has developed a robot that cleans the submerged part of the ship, without the need to redock the ship out of water.

This robot is not intended for the pleasure of boat owners, but rather it is meant to help companies involved in the design and construction of ships. Before the delivering of boat or the ship to the customer, the samsung’s robot can perform the cleaning of the hull of docked ships.

The company has already conducted pilot tests and will start its tests on ships ready for delivery, starting from November this year.