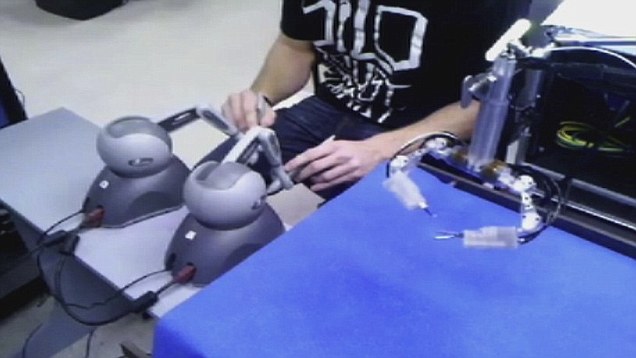 Robots are playing a very critical role in every walk of life from industrial manufacturing to house cleaning and from hotels to driving. Now, after seeing such diverse applications, they are now being developed to do the job of a doctor. They had been lately used to perform surgeries but recently a robot known as “doctor droid” is being developed to perform critical surgeries of astronauts in the space. This robot is being developed as a result of collaboration  between Virtual Incision from Nebraska and NASA. Interestingly this robot can be controlled remotely from the earth station.

This Robo-surgeon can be used for the abdomen, stomach and gastric surgery by sliding into the body. It is just a fist-sized robot with a weight of 0.4Kg. A prototype has been developed by NASA and ready for its gravity test which is expected next week. It is equipped with a small camera in its head and two arms to hold the apparatus and tissues. The camera makes the video and sends it back to the earth station where an expert surgeon instructs the robot to perform specific tasks. Joystick is being used to control the robot.

A recent technical report on Robo-surgeon says that although research work in this field is still in the early phase, yet this technique has the potential to be used to perform remote surgeries on future human colonies on Moon or Mars.

Controlling the robot from such a distant place will surely add delays which can result in loss of data and communication. To combat with this problem, NASA has decided to train its astronauts so that they could easily perform surgeries. This can save millions of bucks as astronauts are sent back to the earth on getting hurt. No doubt, this project has a lot of potential. Our robo-surgeon will be able to help the astronauts. The recently designed prototype has been successfully tested on pigs and space agency is enthusiastic to test its working on humans also.