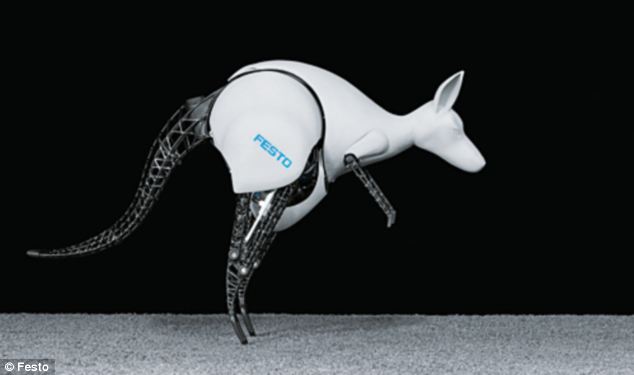 Robots work very efficiently till they are properly and constantly powered. As the source of power is removed or the battery comes to an end, their movement become fuzzy. However, now it sounds great to listen about a hopping kangaroo that can jump for eternity.  Special thanks to the German scientists who have developed this robot kangaroo that can produce its own energy. They were working since the last two years on the project of self-charging robots.  This bio-inspired robot, named as “Robo-roo”, recharges itself while jumping on its legs.

Scientists see its bright future in automation, control and other industries. It could play a vital role in the automated manufacturing of Cars and Computers. The bionic robot is gesture-controlled and becomes unstoppable as it retains energy very efficiently from one jump to another. So, it may keep on jumping forever.

The kangaroo charges itself with the help of elastic spring. As the kangaroo places its legs on the ground, it gets charged and the battery is charged enough to make the next move. The group was studying the behavior of Kangaroos very keenly and the creation is inspired from the natural tendons of Kangaroos. These tendons are used as an elastic spring to jump. Along with elastic spring, the kangaroo is also equipped with a small tank which provides high pressure to power pneumatic muscles used in movements.

According to Dr. Heinrich Frontzzek these Bionic Kangaroo are very similar to real world Kangroos that have the ability to recuperate and store energy, then use it again for the next jump.  This robot kangaroo is 7kg in weight and 1m in height. The robo-roo jumps to 40cm vertically and 0.8m horizontally. Its jump resembles the real kangaroo as just before the jump the center of gravity is shifted in forward direction. As the threshold angle is reached, pneumatic tubes are triggered by releasing the energy from tendons. This makes the takeoff of the kangaroo and it moves itself forward. As it steps its foot on the land, the tendons is compressed again converting the kinetic energy into potential energy.

Scientists have no intentions to commercialize the product as their aim is to open new horizons in recovering energy from motion.