Google glass will be used by US army personnel to fire around the  blind corners. The technology works by sending the live video from the rifle’s sight which could be seen and recorded on a glass or even an iPad. The system takes wind, air pressure and elevation into account to spot a target.

No one thought that Google glass would one day be used by the US army. Now, it could be used by the military personnel to fire around the blind corners. TrackingPoint is a US firm that has made such a marvelous use of the Google glass. A small rifle has been introduced that is able to display the live video from the sight on the Google Glass display. The live video can also be recorded on a glass or even iPad. In this way, the soldiers need not to take position to see the target but only require to point rifle at the target. 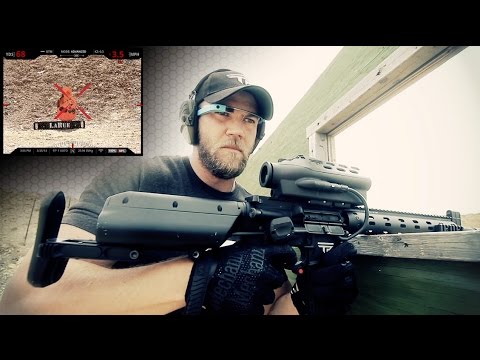 The system has been named as PGF, acronym of Precision Guided Firearm. The system takes wind, air pressure and elevation into account to spot a target. According to the TrackingPoint firm this combination of wearable technology and weaponary gives numerous benefits to the shooters. The shooters can now shoot from positions providing exceptional cover ,for example, around corners and from below low walls etc. In the past it was very difficult to fire from such positions.

Using ShotView app, the user along with seeing the video stream google glasso, can also see the range to the target, battery life, shot angle, direction of compass and zoom setting. The soldier can have all this information without taking his eyes off the rifle. No distraction and no diversion of the attention results into a precise and perfect shot. Interestingly, the commander can monitor the situation with the help of live feed. All these calculations are made with the help of measurements by the sensors. The PGF technology can also be used to target the moving objects at a distance of 1200 meters. The technology is really effective in a way as a group of shooters can collaborate with one another.