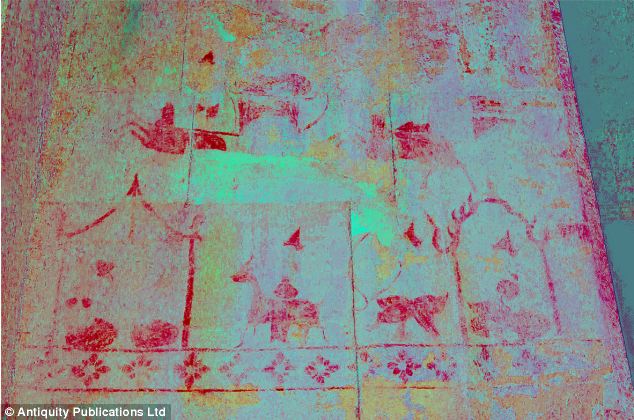 A large number of people tourists and Buddhist monks visit Angkor Wat in Cambodia each year. The archaeologists are now using NASA’s technology to locate 200 hidden paintings. These are the paintings of elephants and gods made on the walls of the towers. These pictures also include musical instruments, patterns and boats, thought to be the graffiti of ancient days.

A large number of Buddhist pilgrims as well as tourists visit Angkor Wat temples in Cambodia each year. The 900 years old towers are no doubt famous around the world. Now archaeologists are using NASA’s technology to reveal some incredible artworks hidden in these temples. They have been able to identify 200 such  incredible hidden paintings. These paintings are of elephants and gods, made on the walls of the towers. Process imaging technology has been used to see these paintings as it is impossible for the naked eye to see them. These pictures include musical instruments, patterns and boats thought to be the graffiti of ancient days.

The famous temple was built in 12th century and is spread over an area of 500 acres. The Angkor Wat was abandoned in the 15th century and the researchers believe that these paintings are in fact the graffiti made by the who came here after the 15th century. However, the more elaborate of these pictures date back to the period when initial attempts for the restoration of the temple were made. Thats why most researchers believe that the temple was partially painted in that period. Most of the pictures of these 200 paintings were taken by the an Australian archaeologist. He took the pictures of the temple with bright lights and then performed decorrelation stretch analysis to reveal these hidden artworks.

Decorrelation stretch analysis is the same technology adopted by the NASA to look at the hidden contrasts in Martian rock photos as sent by MARS Rover. The old temple was built by the Khmer King Suryavarman II. On first glance, it looks like a big stone but it actually contains numerous small elevated towers, chambers, porches and galleries. All the parts of the temple are connected with one another through stairs. The paintings reveal the pictures of Hanuman god, monkeys and lions, the most important part of the Hindu religion. These paintings date back to the 15th century when temple was restored as a Hindu worship site for God Vishnu. The paintings also contain the pictures of the magnificent temple itself.

Dr. Tan says, “Some of the most detailed paintings, the ones located at the top of the temple, are passed by literally thousands of visitors every day, but the most elaborate scenes are effectively invisible to the naked eye.” Few pictures are so randomly arranged that researchers are forced to believe that these paintings are made by the pilgrims. Another group of pictures is drawn on the top of the temple which is thought to be of the 16th century when a restoration process started and interestingly during the same era, the temple was turned from Hinduism to Buddhism. A chamber known as Bakan contains paintings of musical instrument like gongs, different xylophones and wind instruments.