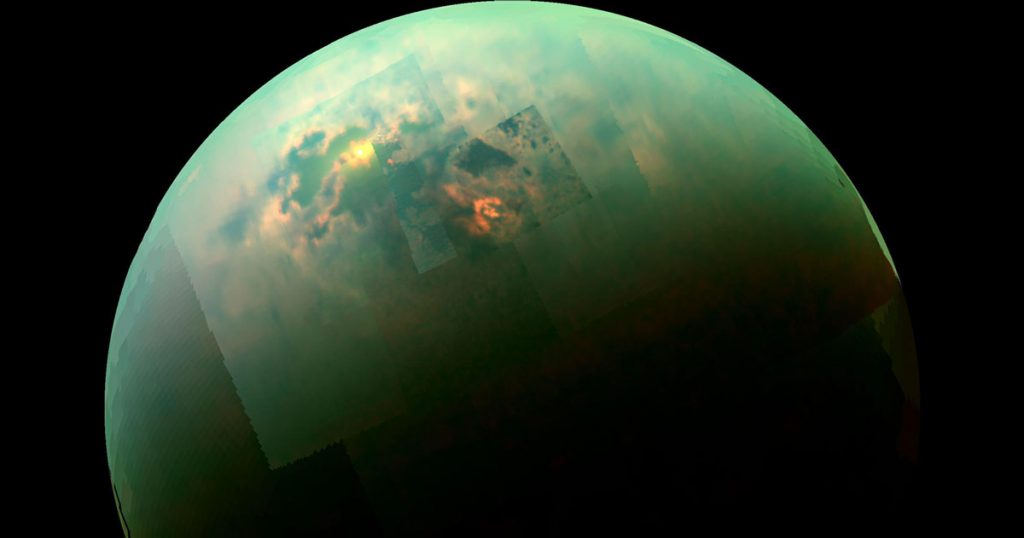 More than two years after the end of the Cassini mission, Saturn and its moons are still revealing their secrets. With data compiled from more than 120 flyovers of the planet and Titan, NASA’s JPL – Jet Propulsion Laboratory – can for the first time provide a complete and detailed map of the surface of the Saturn’s moon “Titan”.

FOR THE FIRST TIME, A TITAN MAP SHOWING ITS UNIQUE DIVERSITY

The map was featured in Nature Astronomy on November 18th . According to researchers Titan, with a diameter of 5151 km has one of the most “geologically diverse surfaces of the Solar System”.

It’s hard to see through Titan’s atmosphere, which makes this map so important. The statement from the NASA explains that the team used radar data acquired by Cassini to penetrate the opaque atmosphere of Titan, due to its nitrogen and methane content. The researchers were also able to exploit visible and infrared data, which the instruments were able to capture through the veil of methane.

“Cassini’s greatest discovery is that Titan is so diverse,” says Ralph Lorenz, a scientist at the Johns Hopkins University Applied Physics Laboratory in Laurel, Maryland. It’s almost like a completely different world, and this systematic mapping brings together all that diversity. “

A NEW WORLD TO EXPLORE?

The plains cover two-thirds of Titan’s surface, with sand dunes (17%). 14% of the surface is hummocks (a flat, bumpy surface), and 1.5% is made up of “labyrinths,” valleys cut by rains and erosion. The rarity of crater impacts indicates that this moon is relatively young.

“The Cassini mission revealed that Titan was a geologically active world, where hydrocarbons such as methane and ethane play the role that water has on Earth,” said David Williams, researcher and associate professor at the School of Earth and Space Exploration of Arizona State University. These hydrocarbons rain on the surface, flow into streams and rivers, accumulate in lakes and seas, and evaporate into the atmosphere. It’s a pretty amazing world! “

THE SATELLITE STUDY IS JUST BEGINNING

The study of Titan will include a deeper understanding of our planet, from which the Titan is not so different. Lopes explains: “Despite the differences in materials, temperatures and gravitational fields between Earth and Titan, many features are similar between the two worlds and can be interpreted as the products of the same geological process. The map shows that the different geological terrains have a clear distribution according to the latitude, globally, and that some lands cover much more surface than others. “

Researchers, to date, are particularly interested in the relationship between the poles of a planet or moon of this scale, its geological composition and its climatic activity. Similarly, another priority is the search for life in this world: this is why Cassini was not crushed on Titan in order to avoid any possible contamination, but was oriented to be burned in the atmosphere of Saturn. NASA plans to send a drone by 2034 for the Dragonfly mission: in the meantime, this new complete survey should remain a reference for the scientific study of this environment.