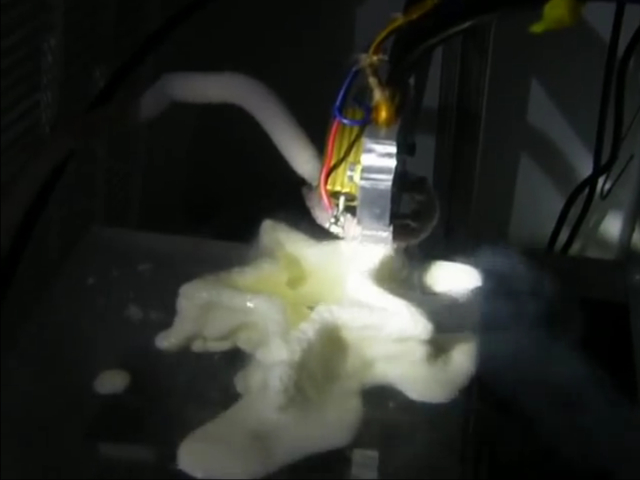 There are now a lot of different types of 3D printers available. Some are classical that allow you to print small 3D objects like a traditional printer. Then, there are the others, those which are a bit special and are dedicated to a specific uses such as making pasta, small pieces of chocolate or even pancakes. But the queen of 3D printers has just arrived.

It comes from MIT and was created by three students of the institute, namely Kyle Hounsell, Kristine Bunker and David Donghyun. Constructed from off the shelf components, this printer is called as the  “proof of concept” and does nothing else except to print ice cream and the shape you want.

You use this printer as all the others: you draw the model on computer and start printing. The printer uses ice cream as its filament to make different designs which are then immediately cooled by a system using liquid nitrogen. Thus, we get the first layer of ice cream of the desired shape. The second layer is then made in the same way, etc. In short, it works like any other 3D printers, layer after layer, the only difference is that here you use cooling mechanism to retain the shape.

Okay, so obviously this printer will not revolutionize the world, but still, there is the idea. And if you’re wondering why the three students wanted to embark on such a project, that is, according to them they were interested in creating something fascinating.