A message of friendship that was put in a bottle and thrown into the Atlantic Ocean from the East Coast of Canada in 1985, is found 28 years later on the Croatian coast after sailing no less than 8000 km..

“Mary, you are really great person. I hope we can keep in correspondence. I said I would write. Your friend forever, Jonathon, Nova Scotia, 1985”, the message reads. Nova Scotia is a province of Canada on the Atlantic coast.

Matea Rezic Medak, a Croatian girl aged 23 and member of a local kitesurfing club discovered this bottle when she along with her friends were cleaning the beach near the port of Ploce (southern Croatian coast), on the Adriatic Sea.

“It was last Sunday when we were preparing the beach for the season. This bottle was among the garbage brought by the winter rains, ” she told AFP.

“Someone certainly stepped on it as the bottle was broken, but writing with a blue ballpoint pen, is very good and the sheet on which the message is written is in plastic covering,” she added.

The young woman photographed the message and posted on his Facebook page. 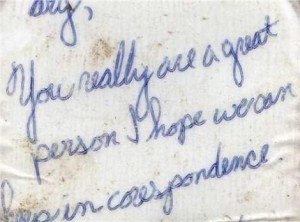