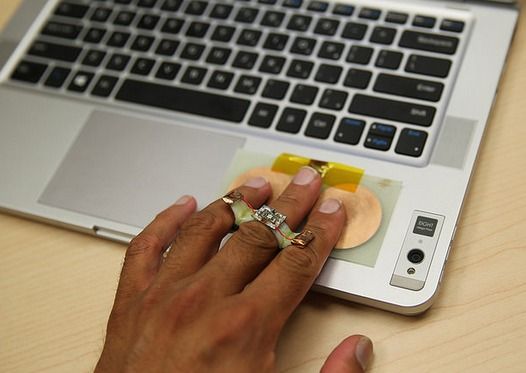 Two students, participating in a summer internship at Intel, have developed a tactile interface to transfer data between two devices via a ring which is powered solely by electromagnetic energy of human body. The system currently only allows the transfer of few bytes, but it opens up many interesting prospects for the development of this technology.

Using the human body to transfer data between two computers, this is what two students participating in a summer internship program at Intel have managed to achieve. Over a period of three months, the purpose of the program was to train students to “solve technical problems in the real world.” In this case, Patrick Jr. and Arsen Buah Zoksimovski have created a device that allows you to copy and paste data between two laptops using a ring.

For this, they installed two touch sensors on PC. When the wearer of the ring puts his finger on the first sensor, an app offers to transfer data. The user selects the desired file via Windows Explorer and it is then transmitted to the ring in the form of electromagnetic signal, the body plays the role of an antenna and ring as the transmitter and receiver. The user then places his finger on the touch sensor of the second laptop, select the “recovery” and the file is copied instantly option.

The ring is not powered by a battery, testing was done with a file having an emotion of few bytes. But the two students have already tested the system for other uses. For example, the ability to retrieve GPS coordinates from a mapping application and transfer it to a navigation device by touch. Or, you can store the ID of a file on a ring and then just touch a compatible printer to obtain its hard copy.

A framework of software and APIs have also been developed to exploit the method with various applications. Most of the work focused on the analysis of electromagnetic waves and how to manage the intereference caused by their propogation through the human body. The objective was to obtain a stable enough signal to read, copy, store and transmit data via a device that is powered by the electromagnetic energy.