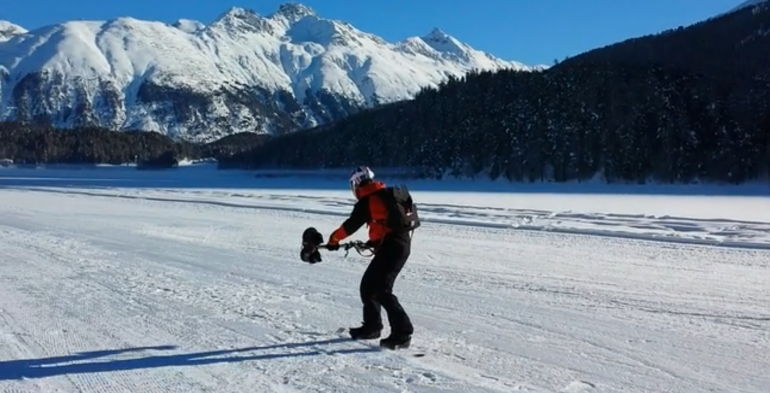 Racing is a very thrilling game for the youth across the globe. Racing lovers are always in search of a new technology that can take their thrill to a new extreme. Now, they will very happy to see the Dreamscience thrusters. Whatever the sports you like in racing whether it is skiing or skateboarding or paragliding, Dreamscience thrusters will definitely help you out achieving high speed dream. The thruster consists of four small engines that can be mounted on the stomach to increase the speed.

To power up the thruster, on-board battery is used. All the four engines of the thrusters have been tested by multiple skiers, skaters, snowboarders and paragliders. Interestingly, the thruster has hit the record speed of 50 miles/hour for paragliding. The speed was accomplished with only one thruster and even higher speed can be achieved with four engines. This run win the photo below was made by Jamie Barrow over the icy lake St. Moritz, Switzerland. The thruster is developed by Contorent a UK based company.

These thrusters can be used to increase the jump height and even can help in climbing hills. To stop the thruster, they can be spun in reverse way. The Contorent says, “The thruster is a very powerful motor driving a fan, about 30,000 rpm, a modern jet engine has a turbojet propulser module at the core of the engine and this drives a large fan at the front of the engine that generates most of the thrust.”

Newer versions of thrusters are in the development phase where the engines can be slowed down or sped up according to the situation like for landing obviously you need to slow down the thruster and for take-off you need to run the engine at its full speed. Extreme sports can become more exciting and thrilling with these thrusters. In future we may hope to see new racing events deploying these thrusters.