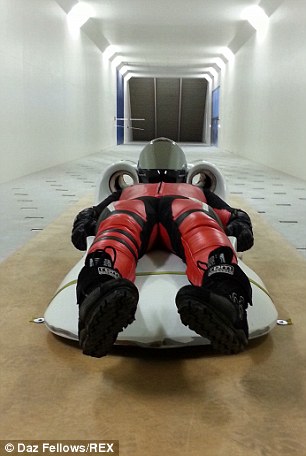 An Australian has developed a sled that can reach the top speed of 311mph as claimed by him. The sled is 3m long and fitted with two jet engines. The current record is 115.83mph which was set by Jason Bradbury in 2011.

It is a well-known fact, that Australians are crazy about sports. Daz Fellows, an Australian, has developed a sled that he claims can reach the top speed of 311mph. If the claim about this superfast sled is true it can make a world record. The current record is 115.83mph which was set by Jason Bradbury in 2011. He showcased his model in South Wales park. The luge designed by Fellows has two thrusters that can produce a combined thrust of 182kg. The street luge by Fellows has undergone a number of tests in South Wales. The Fellows started working on the project last year.

Coincidently both the record breaking inventors are from New South Wales. The Fellows’ sled is 3m long and fitted with two jet engines. Fellows is a TV stuntman and famous by a stage name of Daz the Cowboy. The board is a redesign of the Jet Luge using carbon fiber and equipped with carbon fuel cells. The man-sized skateboard has two controls, acceleration and deceleration is done using thumb control while direction can be changed using a lean steer turning. You can adjust the speed of the sled with the help of your thumb rolling. You can also adjust the speed before start up.

Trigger grip can also be used with the man-sized skateboard in order to speed it up/down. In this way, you can just use your pointer finger to control the luge. A kill switch cable is attached with the rider that shuts off everything in case of some emergency. It also provides a secondary unit positioned at the back to provide redundancy if in case the rider is unable to see something; another person can switch the whole system off.  The Fellows is not a new to this industry but he is actually the one who started street luge back in 1996.

A lot of efforts are made by the Fellows and his team in materializing this skateboard. Almost one and a half year is spent by the team to make the launch of such a marvel possible. The attempt to break the record will be carried out next year between April and August. During this period, he will try to minimize the temperature and maximize the thrust.