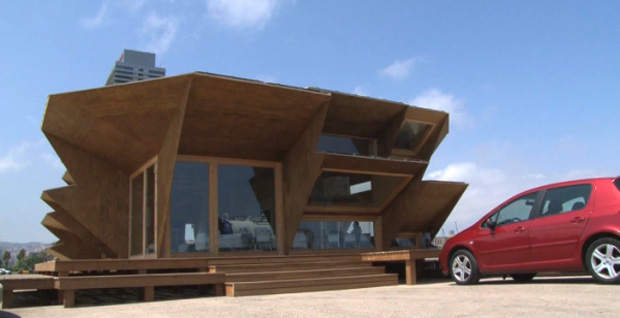 The architecture of our homes is evolving with time to make them more enerrgy efficient. Here we present a house which was constructed in just 5 weeks. The most important feature of this house is the solar panels that are placed at strategic locations to maximize use of solar energy.

The house has been designed by Rodrigo Rubio at the IAAC (Institute for Advanced Architecture of Catalonia). The house was constructed using prefabricated material in amazing period of just five weeks. Digital designing techniques were used in the construction of the house. This enabled to meticulously maximize the house space as well as the efficient use of solar energy. The house is self-sufficient in energy.

The house is located at Barcelona’s Olympic harbour. According to Rubio, 34,”Each module is adapted to its specific position in relation to the Sun’s path,”. Designing the house involved feeding the feeding temperature, energy and radiation data into a software model to generate the position of panels in house in order to maximize the exposure of solar panels to sun.  The solar panels have been placed at an angle such that during winter they let the sunlight in the house for warming while during summer they stop excessive sunlight from entering the house.