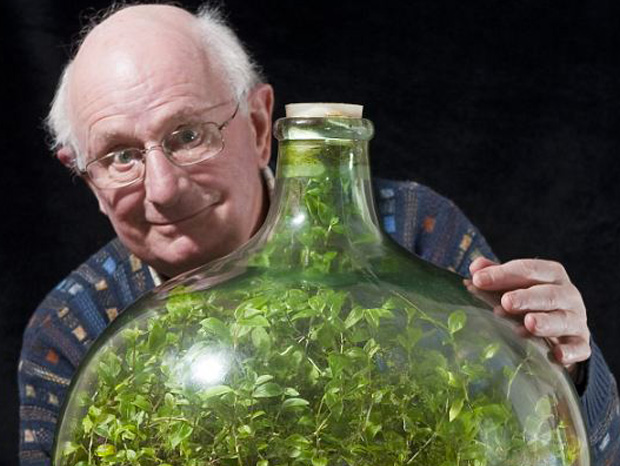 David , an amateur gardener, had wonderful idea to grow a plant in a bottle and then seal it forever. Discover how the amazing plant created its own ingenious ecosystem to survive.

More than 53 years ago, David Latimer had the idea to enclose the plant named Tradescantia in a huge bottle.  A few years later, in 1972 he opened the bottle for the last time to water the plant and then sealed the bottle for ever so that no more air particle can enter or leave.

How is this possible that the plant is able to live on its own for so long? Where, the sunlight is the only external component used by the plant? In fact, the sunlight is required by the Chlorophyll in plant leaves to produce energy used in various plant activities. During the process the plant absorbs the Carbon dioxide and releases Oxygen. However, during the night as there is no photosynthesis the plant absorbs Oxygen and releases Carbon dioxide. Hence, the oxygen produced during the day is reused by the plant during night and this is happening for the last 40 years. Similarly, water is absorbed by the plant and then released into the bottle during transpiration. This water then condenses and goes again into the roots of the plant. The dead leaves falling on the mud in the flask after sometime convert into natural fertilizer.  In short, a crazy idea of Mr David on a Sunday, resulted in a well-oiled ecosystem.

This exceptional story has started to attract the interest of serious researchers at organizations like NASA, who are interested in the case as same sort of mechanism may have to be used to provide for the needs of colonies on Mars or Moon.