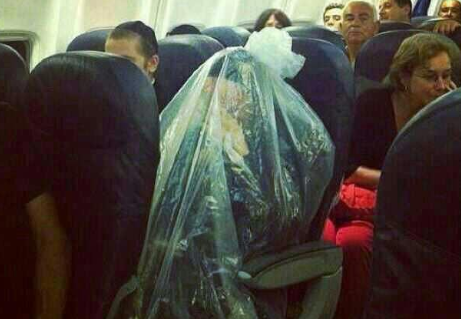 An ultra-orthodox Jew enclosed himself in a plastic to board a plane. He believed in this way he could protect himself from impurities and sins during flying.  This ultra-Orthodox Jew is part of the descendants of Cohen. Members of this group are not allowed to be in the same space as a woman. Furthermore, the religious tradition also forbids them to fly over Holon cemetery near Tel Aviv in Israel.

It is not the first time that Israeli airline, El Al, had to deal with such requirements from Orthodox Jews. Earlier, some of them had asked the airline to change their seats so that they don’t have to sit next to a woman. The company is also facing a legal action by an american Jewish woman named “Debra Ryder”,  she had to go the back of the air plane so that orthodox jews can walk easily without a woman near them. However, this case of a man covering himself in plastic bag to travel by air is particularly rare.

In 2001, the rabbis had advised people to protect themselves from impurities and sins of flying over the Holon cemetery by enclosing themselves in plastic bags. The El Al had taken the precaution of not allowing the people to use the sealed bags to cover themselves. In another case, the Swissair airline had to modify its itinerary over Israel in order to not to pass over the cemetery.