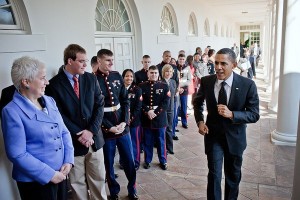 President Barack Obama passes staff from the White House Military Office as he jogs along the Colonnade of the White House following an event that ran late, March 1, 2011. The military personnel and their families were lined up to take departure pictures with the President in Oval Office. (Official White House Photo by Pete Souza)

This photograph is provided by THE WHITE HOUSE as a courtesy and may be printed by the subject(s) in the photograph for personal use only. The photograph may not be manipulated in any way and may not otherwise be reproduced, disseminated or broadcast, without the written permission of the White House Photo Office. This photograph may not be used in any commercial or political materials, advertisements, emails, products, promotions that in any way suggests approval or endorsement of the President, the First Family, or the White House.