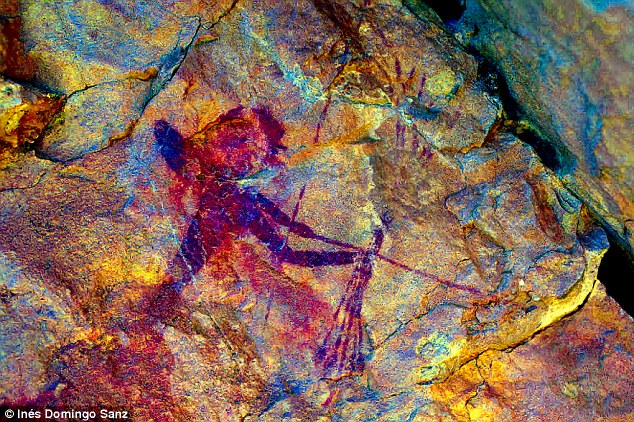 A cave has been discovered in one of Spanish cities revealing the facts from the prehistoric era. The paintings on the walls are thought to be 7000 years old. To preserve the paintings, exact location of the cave is untold yet. The paintings are show two men, two aurochs and a goat.

A cave has been discovered in one of Spanish cities revealing truths about the prehistoric era. The cave has interestingly preserved the hunting scenes from the prehistoric era in a very effective way. The paintings are thought to be 7000 years old and are well preserved. The art work has been preserved because the small cave is out of the reach of harsh weather. The paintings have been found on a small wall of a cave in Vilafranca, a small town in the eastern Spain. To preserve the paintings, exact location of the cave is untold yet. The paintings are showing two men, two aurochs and a goat.

Interestingly, according to the archaeologists, it is the dust which preserved the painting and not let the pigments degrade. Computer vision has helped in identifying the aspects of the painting hidden under dust. The researchers consider it to be the scenario of hunting and chasing of a prey. The paintings have been  unveiled by the researchers of University of Barcelona, University of Valencia and University of Toulouse II mirail. They were actually examining another area and came across this cave accidentally.

According to Dr. I.D. Sanz, “Hunting scenes are common in Levantine rock art…they are mostly focused on deer, goat or wild board hunting, but bull hunting is far less common, When depicted, they usually [show] linear archers – very schematic figures – later in the sequence. However, in this new site, the archer they are related with is also naturalistic.” Unesco included the Levantine rock art into the world heritage back in 1998. The work art consists of more than 700 sites of the prehistoric era. We can say that the art work of this era is already internationally recognized. The bulls are the prominent part of this artistic work and interestingly this painting also show 4 bulls in it.

According to the professor, there are some other art works as well in this area but 700 sites are unique in their own nature. The method of hunting is also new in these paintings. The painting contains some unknown animal as well, which will be revealed in a research paper later on. The Volltorta-Gasulla caves are considered among the most important open caves in the world revealing ancient art. Few other caves show agriculture scenes as well. Some hunting techniques are revealed through these paintings including bow and arrow usage during the hunting.