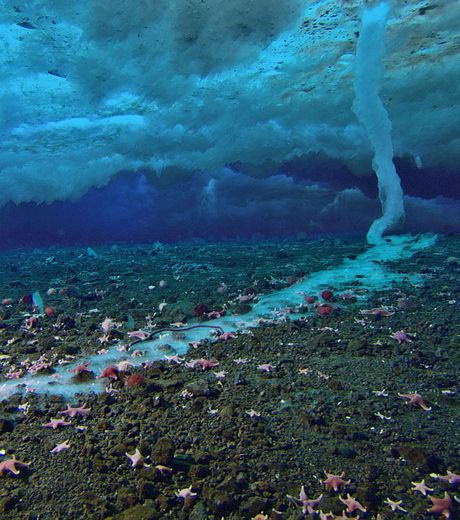 This world is full of strange things that provoke curiosity of human mind. We find strange and diverse natural phenomena everywhere on the earth. We have compiled the photo gallery of 10 of the strangest and most unusual phenomena on our planet Earth.

– The Red Tides  : The red rides are generated when the when Algae accumulate rapidly on a shore, a coast or a beach. While some are harmless, others can be deadly to marine life due to the influx of many toxins. China Sea suffers regularly from this phenomenon.

– Fire Tornadoes : Popularly known as the  firenados  or fire tornadoes, these tornadoes are formed as a result of the forest fires and some tornadoes gather enough strength to even uproot the trees.

–  Glowing Ghost Mushrooms: Also known as the “magic fire,” this phenomenon is the result of natural bio luminescence in a certain species of mushrooms found in woods. These mushrooms shine like fireflies.

–  The Basalt columns: These are typically hexagonal columns, formed by relatively rapid cooling of flowing lava, making small columns of hard basalt. They can be found in Iceland, Germany (Bavaria), the Faroe Islands and Armenia.

– The rainbow of Fire : A rainbow of Fire is an optical illusion caused by icy crystals in the clouds. These small ice crystals are aligned horizontally. They act like a prism and split the the light by refraction phenomena  into a multicoloured curtain.

– Sandstorms  : The Sandstorms are formed in the arid areas around the world like Sahara, Iraq, Texas and Chilean desert. They are dangerous to the fertility of a land as they can remove the nutrient rich upper layer of the soil.

– The Bark  of Eucalyptus: The bark of eucalyptus tree can have a wide range of different colours as it grows up. The origin of this tree is Philippines but it is also cultivated in other countries like  France.

– “Brinicles”  : Also called the “ice finger of death”, this is a flow of salty water that freezes as it delves into deep ocean. As it freezes, it forms a white trail. The phenomenon was discovered for the first time in 2011. To capture this effect you will have to immerse many submersible devices equipped with high-definition cameras in deep water for many days.

– The Blue Holes  : These holes are typically circular and are created due to sink-hole caves underwater. These holes appear dark blue as at that point the water depth is greater than the rest. They are found in Belize, in the Red Sea of Egypt and the Caribbean. The deepest of all is located in the Bahamas, named as the “Dean”.